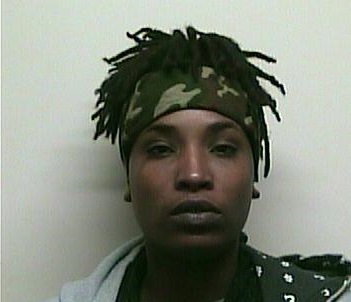 (Stillwater, Okla.) — A 28-year-old Tulsa woman convicted of armed robbery and possessing crack cocaine with intent to distribute has been charged with choking her girlfriend and pushing her down a flight of stairs in Stillwater.

Due to her criminal record, Richada Wandrea Crawford, also known as Mariona Michelle Marie Maupin and Maupun Mariona, could be given a prison term of 20 years to life if convicted of the felony count of domestic assault and battery by strangulation.

Crawford could be given as much as a one-year jail term if convicted of the misdemeanor count of domestic assault and battery, court records show.

Four days after her arrest, Crawford was released from the Payne County Jail on $2,500 bond with the condition that she have no contact with her alleged victim.

Crawford has been ordered to appear in court on June 1 with an attorney on the two-count domestic violence charge in Payne County.

Stillwater Police Sgt. Jennifer Gripe wrote in an affidavit that Crawford was arrested at an apartment complex at 1001 N. Perkins Road on April 24 at 5:14 pm — 30 minutes after officers responded there on a report of several women arguing.

“Upon arrival, I located three females sitting inside a vehicle outside of the C building and they appeared to be arguing. I contacted them and asked what was going on. The front seat passenger, Richada Crawford, told me nothing was going on. She told me that she was having a debate with her fiancee,” the sergeant wrote in her affidavit.

“Crawford got defensive about the presence of officers, so I attempted to explain that we were called to respond there for the disturbance. I told them it was not illegal to argue, but doing so in public could disturb the peace of others.

“I was unable to get any more information from the occupants of the vehicle at that time, so I ended the contact and walked back to my patrol car. When I got back to my patrol car, I heard the arguing start back up and it was louder than before. Officers Simpson, Busenius and I walked back over to the vehicle to contact the occupants,” the sergeant wrote in her affidavit.

“As I made contact with them again, Crawford stated that (her girlfriend) bit her on the arm. (Her girlfriend) confirmed that she bit Crawford because Crawford was choking her. Crawford was moving her arms around, and I was unable to determine if there was an injury,” the sergeant wrote in her affidavit.

“I asked Crawford to tell me what was going on and she just repeated that nothing was happening. I told her that I was investigating a possible domestic assault and needed her information. I reminded her that she said (her girlfriend) bit her. Crawford denied saying that even though I told her it was recorded that she did say it.

“As the contact went on, Crawford said (her girlfriend) did bite her, but she was fine and didn’t need my assistance. She quickly changed to say there was no bite. All during my contact with her, Crawford refused to provide the most basic information about her, which was her name,” the sergeant wrote in her affidavit.

Officer Joshua Simpson requested an ambulance for Crawford’s girlfriend, who had told him they had started fighting at about 10 am in an apartment, the affidavit alleged.

“During the altercation, Crawford pushed her down the stairs. (Crawford’s girlfriend) had scrapes to her right ankle and leg, as well as bruises on her arms. (Crawford’s girlfriend) also had obvious impairment to her leg in regard to her inability to walk or put weight on her right leg. It was determined that Crawford would be arrested for domestic assault and battery,” the affidavit alleged.

“She continued to refuse to provide her information at the jail. Her information was obtained from (Crawford’s girlfriend) by officers still on scene,” the affidavit alleged.

According to Tulsa County court records and the state Department of Corrections, Crawford was released from prison in February of 2018 after serving about two and one-half years of a four-year prison term she was given in 2015 for violating her probation in a 2013 case of possession of crack cocaine with intent to distribute. Crawford also served a concurrent two-year prison term for a 2014 armed robbery, followed by eight years of probation on which she remains.