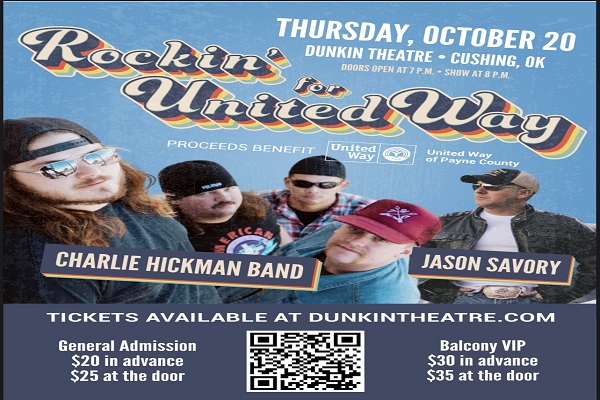 (Payne County, Okla) — The United Way of Payne County invites the community to attend the first-ever Rockin’ for
United Way Benefit Concert on Thursday, October 20 at the Dunkin Theatre in Cushing. Doors open at 7 p.m. Charlie Hickman Band will headline the night, with an opener from Jason Savory.

“We encourage any and all to come out for the show,” Ruth Cavins, United Way of Payne County Executive Director, said. “The Rockin’ for United Way Concert is a great way to support your friends, family, neighbors and someone you might now even know.”

Ticket proceeds will benefit the United Way of Payne County and the 22 nonprofit partner agencies they support.

The headliner, Charlie Hickman Band, was formed in Cushing in April of 2016. Their hard-hitting rock and roll sound is a reflection of influences including Hank Williams Band, Foo Fighters, Switchfoot and Incubus. Their single “Tell Me Why” has more than 20,000 listens on Spotify.

Jason Savory, a Ripley native, got his start in the spring of 2012. His original Red Dirt sound came from his local background and musical inspiration from the likes of George Jones, Gary Allan, Merle Haggard and Chris Ledoux.

United Way agencies benefit 1 out of 5 Cushing residents each year. For the first time in its 70- year history, United Way has set a goal of $1,000,000 for its annual fundraising campaign.  Cushing’s local campaign goal is $30,000.
Latina Simmons, Enbridge employee and United Way board member, is the chair for the Cushing campaign.

“We thank both bands and all the staff at the Dunkin Theatre for helping the United Way put on this special night,” Cavins said. “Proceeds from the concert will help with needs such as food, shelter, rental assistance and much more.”

When you donate to United Way of Payne County, you support the work of 22 nonprofits, which collectively impact more than 73,000 Payne County individuals and families each year. To learn more or donate, visit www.unitedwaypaynecounty.org or call 405-377-2161.