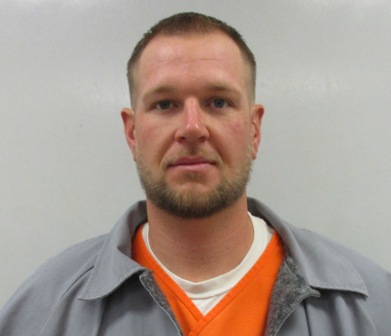 (Stillwater, Okla.) — A Tryon man, who served prison terms for domestic violence in Payne and Lincoln counties, has been jailed without bail on felony charges of violating two emergency protective orders and stalking his ex-girlfriend.

Due to his criminal record, Brandon Dean Munier, 33, who got out of prison a year ago, could be given as much as three life prison terms if convicted of all of his charges, on which he has been scheduled to have preliminary hearings on Jan. 13, 2020.

In his latest EPO violation charge on Nov. 20, “Munier created a fake Facebook page and used it to contact the victim,” Stillwater Police Officer Andrew Wilson alleged in an affidavit. Munier allegedly sent the woman “photographs of her personal property as well as intimate photos of herself,” according to the charge.

Two months earlier, the woman had obtained an EPO against Munier in Payne County in which she wrote, “somehow he found out I was at Boomer Park,” where she alleged he chased her in her car.

“I ended up on a no outlet road. He blocked me in, busted out my driver side window, he then took off in reverse and smashed into two other vehicles and sped off. He then tried to say I hit his truck. He’s been making small threats about how he will make sure I lose my kids and how he will kill my parents,” she alleged in her EPO petition.

In another EPO violation charge on Nov. 10, Munier allegedly created alternate Facebook accounts to contact his ex-girlfriend and attempt to arrange a meeting, court records show.

The woman “advised me that she was fearful for her life and wanted him to stop, but she knew that he never would. She even advised me that he told he that he would never leave her alone until he was taken out in a body bag,” Stillwater Police Officer Cory Westbrook alleged in an affidavit.

The Stillwater police officer, who located Munier in a fast-food parking lot, told him “I was with her at her home when he was messaging her,” the affidavit alleged.

Munier was arrested on Nov. 10 for that alleged EPO violation, but released on $5,000 bail two days later, court records show.

In a felony case charged as stalking as a subsequent offense between March 25 and Oct. 27, Munier was alleged to have sent text messages in which he threatened to kill the woman in front of her children, followed her to the Stillwater police station where she went to report an assault and battery by him, damaged her vehicle, made numerous phone calls from different numbers, and threatened to harm her as he had harmed a previous partner. Munier was freed on $50,000 bail on Nov. 7, court records show.

Stillwater Police Officer Shawn Millermon alleged in an affidavit with the stalking charge, “Brandon is extremely dangerous and it is obvious he will not leave (the woman) alone. He told her on a recording she would end up like a victim that was brutally beaten, stalked and strangled.”

According to the Oklahoma Department of Corrections, Munier, who is 6’2″ and weighs 200 pounds, was previously convicted of:

* domestic abuse and using an offensive weapon in a felony in 2012 in Payne County, for which he was originally given probation that was changed in 2017 to two concurrent five-year prison terms of which he served one year and eight months before his release in November of 2018;

* domestic assault and battery by strangulation in 2015 in Lincoln County, for which he was originally given probation that was changed in 2016 to 1,797 days in prison of which he served one year and eight months prior to discharging that sentence in April of 2018.