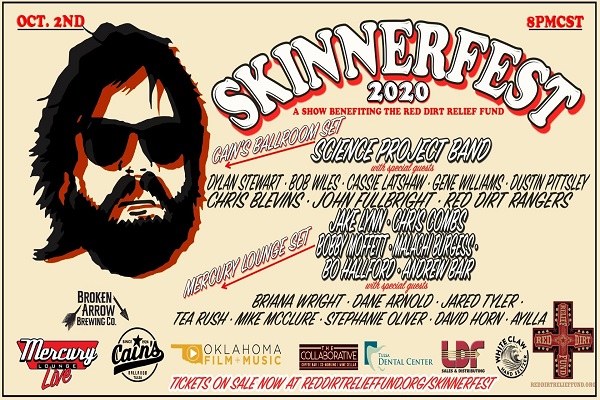 (Tulsa, Okla) — Now in its fourth year, the Tulsa music fest that has become known as Skinnerfest, will air as a streaming event through Mercury Lounge Live on October 2, 2020 at 8:00 pm. All proceeds benefit Red Dirt Relief Fund which has provided $145,000 to 580 out-of-work Oklahoma music people since March.

The festival will feature two sets recorded live at iconic Tulsa venues—Cain’s Ballroom and Mercury Lounge. The show celebrates the beloved and legendary Oklahoma Music Hall of Fame songwriter, Tom Skinner, in a tribute set featuring guests backed by Tom’s band, The Science Project. The second set is a glimpse into the creativity of Tulsa music today—a kind of homage to the band “experiment” Skinner inspired.

John Cooper, Red Dirt Relief Fund Board member and Red Dirt Ranger band member, co-hosted and performed on the set at Cain’s Ballroom. “To hear all those fantastic Skinner songs performed by his dear friends, and backed up by Tom’s own Wednesday Night Science Project band, was an absolute thrill. I can’t wait for everyone to see and hear the final product.”

In previous years, the fest featured more than 45 Oklahoma musicians performing live across three venues at 18th & Boston in Tulsa. But due to COVID-19 venue capacity limits, Red Dirt Relief Fund opted to record a virtual event for patron, musician and crew safety. According to RDRF Executive Director Katie Dale, “As an organization dedicated to the well-being of Oklahoma music people, safety was of course our top concern. We were fortunate on this project to work with top notch musician, production and venue professionals who were also dedicated to keeping everyone safe while recording full bands with multiple guests.”

According to Jake Lynn, music director for the set at Mercury Lounge and current drummer for Jason Boland and the Stragglers, “It was exhilarating getting to put that group of people together. They surpassed my expectations. That’s why I like doing things like this—it’s a glimmer of hope. It is possible for people of completely different backgrounds to come together on a whim and make those type of sounds. It left us all charged.”

A pay-per-view ticket is $15 with merchandise bundles available. The ticket link to watch the show will be emailed to patrons and be available to watch for five days after the premiere.