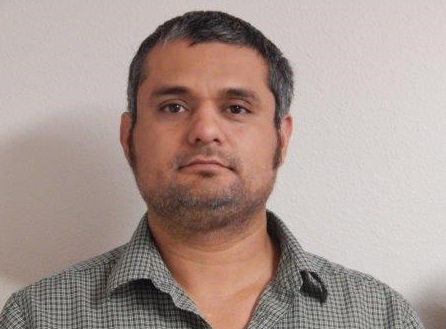 (Stillwater, Okla.) — A Stroud man with a criminal record in four counties has been jailed on $40,000 bond pending a Jan. 21 court appearance in Payne County on charges of delivering methamphetamine to an informant for the Stillwater Police Department and possessing a .22 caliber loaded revolver during a drug transaction.

Jeremiah Roy Valenzuela, 36, who got out of prison in July of 2018, could be given as much as a life prison term plus 10 years and a $30,000 fine if convicted of both counts filed last week.

Valenzuela was arrested in the parking lot of a business on Main Street in Stillwater at 11:24 a.m. on Jan. 10, Stillwater Police Officer Josh Carson wrote in an affidavit.

The police informant had contacted Valenzuela on Facebook Messenger and set up a methamphetamine purchase, the affidavit alleged.

After the alleged drug transaction, the Stillwater officer searched Valenzuela’s Jeep “and located more methamphetamine packaged for sale in the center console along with empty zip top baggies and a set of working digital scales,” according to his affidavit.

“Next to these items was a holster with a .22 caliber revolver inside,” which was loaded, the affidavit alleged.

A total of five grams of a substance that tested positive for methamphetamine was seized, the affidavit alleged.

At the time of his latest arrest, Valenzuela was free on $15,000 bond on a charge of attempting to elude police from Highway 177 and Highway 33 in Perkins to Highway 18 and south onto numerous Lincoln County roads, at times driving more than 100 miles per hour while a passenger was urging him to stop, court records allege.

Valenzuela fled on foot after his truck crashed sometime after midnight on June 17, 2019, Pekins Police Officer Charles Danker alleged in an affidavit.

Following a chase from Perkins into Lincoln County, in which the driver periodically turned off his lights, the truck ran into a guide wire of an electric utility pole, the affidavit alleged.

“I applied my brakes to stop and on the heavy dew and mud, I slid into the rear of the suspect vehicle. The driver bailed out on foot and ran. I gave commands for him to stop and he ran into the woods. I continued chasing him through the woods and into a clearing where he went into another patch of brush,” the Perkins officer alleged in his affidavit.

When the Perkins officer asked the passenger why he ran, “she said he had been drinking and told her if he got arrested, he would go back to prison,” the officer alleged.

According to the Oklahoma Department of Corrections and court records, Valenzuela had previously been convicted of:

* methamphetamine possession in Cushing in 2016, for which he was given a five-year sentence from Payne County concurrent to the following Lincoln County prison term;

* actual physical control of a vehicle while under the influence of alcohol in Lincoln County in 2013, for which he was originally given probation that was revoked in 2016 to a five-year sentence;

* domestic abuse by strangulation in 2016 in Edmond, for which he was given a two-year sentence from Oklahoma County concurrent to his Lincoln County prison term.

Valenzuela also was convicted in 2008 of actual physical control in Tulsa County, for which he was placed on probation for two years with 10 consecutive weekends in the Tulsa County Jail, court records show.