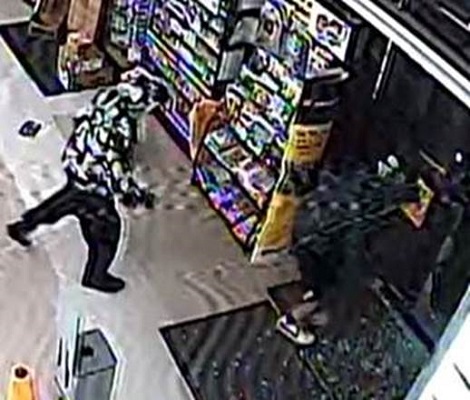 (Stillwater, Okla) — On Wednesday, June 22, 2022 at 2:32 a.m., Stillwater Police responded to Dollar General (1608 N Cimarron Plaza) for a commercial alarm. When the initial officer arrived he noticed that the glass door on the front of the business was broken and there was a large amount of glass on the ground, both inside and outside of the business.

Officers checked for possible suspects, but did not locate anyone. The officers located a large piece of concrete inside the business that the suspects used to gain entry.  The store manager arrived shortly after and checked the business, but discovered that nothing was missing from inside.

The security camera video shows two suspects walking up to the door at 2:27 a.m. and breaking the lower half of the door. One suspect is described as a black male wearing a black and white camo hoodie, black pants and black shoes. He entered through the broken door carrying an empty black milk-crate. The other suspect is described as a white male wearing a dark camo hooded jacket, black shorts, white shoes and black socks. He entered through the glass door carrying a stick. Both suspects had objects covering their faces. The suspect carrying the milk-crate attempted to break the locked case where the tobacco products are kept with the crate, but was unsuccessful. The suspect carrying the stick attempted to strike the glass with the stick, but was also unsuccessful. The automatic lights turned on and both suspects run out of the store.

Anyone with any information is asked to contact our tipline at (405) 742-8327. We are aware that the images are blurry, we are sharing in case someone might recognize something. Thank you!