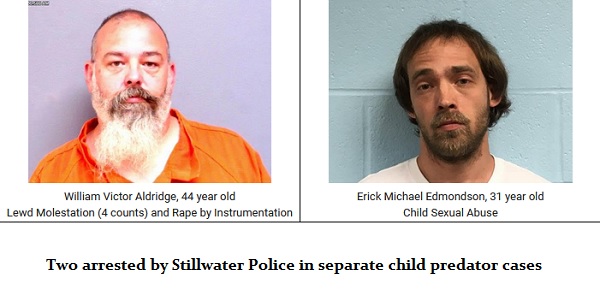 STILLWATER, OK) – On the evening of May 2, 2022, Stillwater Police received a call regarding sexual assault of a child victim. Patrol officers obtained the initial information and a detective from the Criminal Investigations Unit was assigned to the case. The investigation was conducted with assistance from the Saville Center for Child Advocacy. This investigation resulted in Victor Aldridge charged with Lewd Molestation and Rape by Instrumentation filed through the Payne County District Attorney’s Office.

On the morning of May 6, 2022, Stillwater Police received a call of an unrelated sexual assault of a child victim. Patrol officers again responded and were joined by detectives from the Criminal Investigations Unit. Again, with the assistance of the Saville Center for Child Advocacy, an investigation commenced. Erick Edmondson was charged with Child Sexual Abuse.

Both Edmondson and Aldridge were located and arrested on May 6, 2022, by Stillwater Police Detectives and Payne County Deputies.

It is not common in Stillwater to make two arrests of child sex offenders in the same day. However, officers and detectives believe getting these two individuals off the street does make Stillwater safer.

This is an arrest not a conviction.