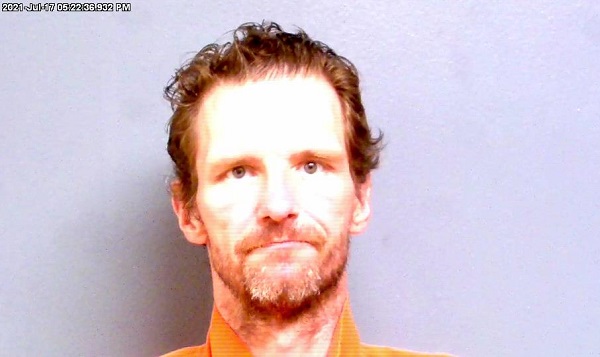 (Stillwater, Okla.) — A homeless man from Stillwater has been charged with breaking into an apartment, pointing a loaded gun at a man, being a convicted felon in possession of a firearm, and possessing heroin as well as methamphetamine with intent to distribute.
Tommy Alan English Jr., 43, who was already on probation for possessing a stolen vehicle, has been jailed on $20,000 bail pending an Aug. 1 court appearance on the four-count charge.
English was arrested at an apartment in the 200 block of N. Duncan on July 10 at 7:40 pm, less than an hour after officers were sent there on a report of a man with a gun, an affidavit by Stillwater Police Officer Christopher Boren alleged.
The reporting party said that he had gone into the apartment “because he believed some of his stuff was in there and was going to get it,” but he got into an argument with English, who pointed a gun at him, the affidavit alleged.
The property owner said, “there should be no one in the apartment and gave us permission to make entry,” the officer wrote in his affidavit.
After Stillwater police called out for anyone in the apartment to come out with their hands up, “Tommy English opened the back door, and it appeared he intended to make a run for it,” the officer alleged in his affidavit.
English complied when he was told to get on the ground, the affidavit said. A woman who came out of the apartment said that she and English “had gone to get food and upon returning, (the man) was in the apartment and he and English got into an argument,” the affidavit said. She said she didn’t know anything about a gun.
Asked how they got into the apartment, she said “they had gotten the keys from a guy named John who had rented them the apartment for $850,” the affidavit alleged.
“A search of English’s person had yielded a large key ring with many keys, one of which was to the apartment…It looked to me like they had stolen a property manager’s key ring. (She) told me no, that some of the keys were to friends’ apartments, and that they also locked all their bags because they move around a lot,” the officer alleged in his affidavit.
After English and the woman, who was later charged only with misdemeanor breaking and entering, were jailed, officers began to search for the gun, the affidavit said.
“I opened a backpack and found loose 9 mm ammunition. In another bag, I located a small, locked metal box covered in tape. In a suitcase, I located a make-up style bag,” with several loaded syringes and vials of an amber-colored liquid. In the same suitcase that the bag was located in, we found the handgun,” a chamber-loaded 9 mm, the officer alleged in his affidavit. English later admitted that the bags with locks in the bedroom were his, the affidavit alleged.
“I located five loaded syringes, two vials full of an amber-colored liquid, several small baggies with small amounts of a white crystal-like substance, several baggies containing a brown/black tar-like substance. I also found a scale and 40 baggies of various sizes. I found several bags and containers with cotton soaked in a liquid,” the officer alleged in his affidavit.
A member of the Special Projects team, who was sent pictures of the items, said, “the soaked cotton was likely what they had used to draw up the heroin into syringes. He believed the amber-colored liquid in the vials was PCP,” the affidavit alleged.
The brown/black tar-like substance found on English tested presumptive positive as heroin, and a crystal-like substance in the bag tested presumptive positive for methamphetamine, the affidavit alleged. All of the substances will be sent to the state crime bureau for chemical testing, the affidavit said.
In addition to a 2021 conviction for possessing a stolen vehicle for which English was given two years of probation, he had been convicted in 2007 of felony domestic violence for which he served about eight months’ incarceration of a two-year prison term followed by two years of probation, state Department of Corrections records show.