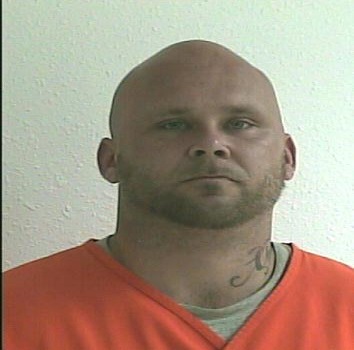 (Stillwater, Okla.) — A Stillwater man has been jailed on $125,000 total bail on multiple charges including rear-ending a bicyclist, who suffered a severe brain injury in April, and eluding police at speeds of more than 100 mph as well as running stop signs and roadblocks in May.

Due to his long criminal record dating back to when he was a teenager, Stanton Bruce McVey, 34, could be given six life prison terms if convicted of six of his felony charges.

McVey, who got out of prison seven months ago after serving time for stealing drugs and a vehicle, has been scheduled to appear in court this week on his new 10 criminal charges that were filed last week.

In a two-count case, McVey has been charged with leaving the scene of personal injury accident in Stillwater while driving a stolen car on April 21.

The victim was riding a bicycle at 10:26 a.m. in the outside northbound lane of Boomer Road while wearing proper riding gear including a bright orange jersey and white helmet when McVey “approached him at a high rate of speed,” and hit the bicyclist from behind, Stillwater Police Officer Ricardo Inciarte alleged in an affidavit.

“Video surveillance from a business in the area shows the event and also shows the vehicle to be a black sedan with tinted windows,” that hit the bicyclist and immediately left the scene without rendering aid to the victim, the affidavit alleged.

The bicyclist “was transported to a trauma hospital in Oklahoma City with a severe brain bleed caused by the impact of the collision among other injuries,” the affidavit said.

Nine days later, the Stillwater officer received an anonymous tip that the vehicle involved in the collision with the bicycle was parked behind a motel located at 5122 W. 6th Ave. in Stillwater, the affidavit alleged.

“I had Stillwater Police Department dispatch check the tag on the vehicle and I was advised that the vehicle was entered in NCIC as stolen from the city of Cushing,” between March 27 and March 29, the officer alleged in his affidavit.

In a separate eight-count charge filed last week alleging acts on May 12, McVey has been accused of eluding an officer beginning in the 1400 block of S. Perkins Road in Stillwater “while driving at speeds exceeding 100 mph, running multiple stop signs and crossing the center line near other motorists.”

McVey has also been charged with running two roadblocks, one at Highway 51 and Fairgrounds Road and another at 12th Avenue and Jardot Road in Stillwater, attempting to elude police on Highway 108 and Glencoe Road while driving more than 100 mph, passing other motorists in a no-passing zone and requiring motorists to pull off the roadway to avoid the defendant.

McVey has also been charged with being a felon in possession of a Taurus 9 mm handgun, leaving the scene of an accident near the intersection of Richmond Road and North Clay road that caused damage to a fence on the east side of the road, possessing methamphetamine and driving on a suspended license on Highway 108 and Glencoe Road.

McVey was arrested at 5:53 p.m. on May 12 at Richmond and Clay Roads after Stillwater Police Officer Kurt Merrill attempted to stop a car driven by McVey at 5:30 p.m., an affidavit said.

“I had been advised by Officer Kevin Radley that the (car) had been stolen from a rape victim by the defendant in a case that he was also suspected in the rape,” the Stillwater officer alleged in his affidavit.

“I attempted to initiate a traffic stop in the 1400 block of S. Perkins Road…The suspect fled. Over the course of the next eight miles that I pursued the suspect, he reached speeds in excess of 100 mph, ran multiple stop signs at speeds greater than 80 mph, went into oncoming traffic almost striking motorists, and running a law enforcement roadblock that had been established by a Payne County deputy near the intersection of Highway 51 and Fairgrounds Road.

“The suspect was eventually apprehended by Payne County deputies near the intersection of Clay Road and Richmond Road,” at about 5:53 pm, the affidavit said.

“The suspect admitted to Deputy Brandon Myers he had thrown a firearm from the vehicle and led deputies and me back to the 700 block of S. Jardot in the city limits of Stillwater,” where authorities recovered a Taurus 9 mm pistol that was magazine-loaded with 10 rounds of ammunition and a holster, the Stillwater officer alleged in his affidavit.

“The suspect has been previously convicted of felonies on multiple occasions in this county. He was also in possession of the firearm as he passed a motorist in a no-passing zone in the 1400 block of S. Jardot, then ran the stop sign at 12th and Jardot at over 80 mph,” the affidavit alleged.

According to court records and the state Department of Corrections, McVey was previously convicted of:

* second-degree burglary and cultivation of marijuana in Payne County at age 18 in 2004, for which he was given five years of probation in 2005;

* second-degree burglary in Payne County in 2005, for which he was given a concurrent five years of probation in 2005;

* second-degree burglary in Payne County in 2006, for which he was given 53 months in prison and served 33 months;

* methamphetamine possession in Garfield County in 2006, for which he was given a concurrent four-year prison term and served about two years;

* theft of 118 and one-half alprazolam pills in Payne County in 2017, for which he was given a 10-year prison term, the balance of which was suspended on his completion of drug abuse treatment two years later;

* car theft in Payne County in 2017, for which he was given the same sentence as above to be served concurrently.