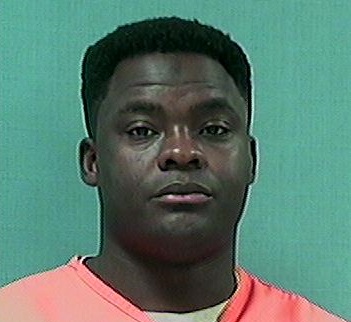 (Stillwater, Okla.) — A Stillwater man with five prior felony convictions has been jailed on $100,000 bail pending a Feb. 1 court appearance on charges of raping, choking and beating his girlfriend between Jan. 4 and Jan. 6, as well as resisting arrest from three police officers.

Due to his criminal record, Aaron Deshawn Christopher, 28, could be imprisoned for 40 years to life if convicted of his felony charges. Christopher had been released from prison 10 months ago to probation after completing the Bill Johnson Drug Offender Work Camp program, court records show.

Christopher was arrested on Jan. 6 at a mental health facility in Stillwater where he and his girlfriend had gone, Stillwater Police Investigator Miguel R. Najera wrote in an affidavit.. His girlfriend was in an office and Christopher was in the lobby, the affidavit said. “He kept looking towards the back and stated he knew he should have gone back there with her,” the affidavit alleged.

“I asked Aaron why we were here and he said he didn’t know. I asked why (his girlfriend) was here and he stated because of her kids,” the affidavit alleged. When the suspect was told that police were investigating a domestic incident, “Aaron became upset and said there was no domestic,” the affidavit said.

Stillwater Police Officer Eric McKinney, who had seen the victim, “told Aaron to turn around and put his hands behind his back. Aaron then attempted to flee towards the door, but McKinney and I grabbed him and a struggle ensued. We were pushed against the office counter and then fell to the ground,” as did the suspect, the investigator alleged in his affidavit.

“Multiple commands were given to Aaron to give us his hand and to stop resisting. The entire situation was very intense due to the possibility of Aaron being armed with a firearm. During the struggle, Aaron stated he did not have a gun on him, but continued to refuse to give his hand,” the investigator alleged in his affidavit.

“We were finally able to get both hands into handcuffs and Aaron was sat up and then sat into a chair,” the affidavit alleged.

When the investigator talked to the victim, “it was clear she was visibly upset and scared. She was crying initially, but calmed down once I told her she was okay. I also informed her Aaron had been arrested, which seemed to calm her down even more.

She said “Aaron has threatened her with a knife and gun in the past few months…(She) stated Aaron has strangled her about five times and recently during one of the incidents asked her if she wanted to die…(She) said sometimes he will beat her and then force her to have sex which is what stops the assaults. (She) also told me during this time that Aaron had slammed her head against the tile floor, thrown her into the wall, slammed the door in her face and her head on the counter,” the investigator alleged in his affidavit.

She “was unable to tell me exact details of when all of the assaults and rapes occurred, but knew one rape and multiple assaults had occurred since Monday evening,” on Jan. 4, the investigator alleged in his affidavit.

Christopher had been convicted in Logan County of drug possession, placing body fluid on a government employee, assault and battery on a police officer and malicious injury to property in 2012, for which he was given jail terms plus probation with an order to enroll in Drug Court, which he failed to do in 2016. Christopher also was convicted in Logan County of second-degree burglary in 2014 and given probation in 2015 that was revoked to one year in jail in 2018, court records show.

In Payne County, Christopher had been convicted in 2018 of marijuana possession in 2016, automobile burglary in 2017, and possession of a stolen vehicle along with attempting to elude in 2017, for which he was given concurrent one-year jail terms followed by nine years of probation with Drug Court from which he was terminated, followed by his being sent in 2019 to the Bill Johnson Drug Offender Work Camp from which he was released last March, court records show.