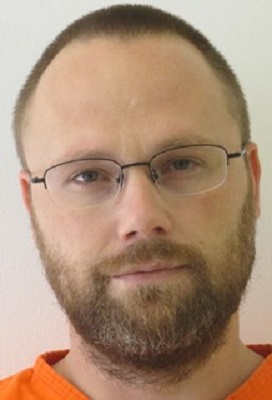 (Stillwater, Okla.) — A 38-year-old Stillwater man on parole for methamphetamine trafficking in Stillwater has been jailed on $100,000 bail pending a July 11 court appearance on the same drug charge as a second offense, as well as being a felon in possession of a 9 mm pistol.
If convicted of his latest charges, Carl Bryan Estes II, who got out of prison two years ago, could be given two life sentences plus a $210,000 fine, court records show.
Estes was arrested at 7:06 pm on June 1, following a traffic stop by Stillwater Police Detective Brett Moore, according to an affidavit by Stillwater Police Officer Josh Carson.
“Carl is a known methamphetamine dealer and recently got out of state prison for trafficking methamphetamine. Carl has an enormous criminal history for illegal drug distribution,” Carson alleged in an affidavit.
After Estes’ vehicle was stopped, “Detective Elliott told me his K9 partner alerted to the odor of illegal drugs in the vehicle. No drugs were located in the car,” Carson wrote in his affidavit.
However, when Carson searched the outside of Estes’ clothing, he felt a hard, crystal substance near the seat of his pants, his affidavit alleged. “It is common practice for drug traffickers to conceal drugs in their pants to avoid law enforcement detection,” according to the affidavit.
“Carl removed two prepackaged 2×2 baggies that contained a crystal substance that appeared to be methamphetamine and a small baggy of pills. The methamphetamine was packaged into two 3.5-gram baggies commonly known as an ‘8 ball.’ Carl indicated the pills were Alprazolam,” the affidavit alleged.
After a search warrant was obtained for his home, “I found a semi-automatic 9 mm pistol in the bedroom alongside a large amount of methamphetamine, working digital scales, ammunition and concealable magnets,” which are used to hide drugs under cars during transport, Carson alleged in his affidavit.
“A total of 39.5 grams of methamphetamine was seized,” which is almost twice the amount required for a trafficking charge, the affidavit alleged.
According to the Oklahoma Department of Corrections and court records, Estes has a long criminal history dating back to 2001 when he was placed on interstate probation from Florida for assault and/or battery with a dangerous weapon in 2000 along with possession of a drug with intent to distribute in 2000 and 2001.
In Payne County, Estes was convicted in 2008 of possession of marijuana with intent to distribute in 2006, along with having the drugs methamphetamine, ecstasy and Alprazolam; he was originally given a 10-year prison term with the balance suspended on his completing a drug offender work camp, but his probation was revoked two years later to prison from which he was released in 2013.
Also, in Payne County in 2008, Estes was given the same sentence, to run concurrently, for possession of methamphetamine with intent to distribute in Stillwater in 2007, along with having marijuana, court records show.
A year after Estes was released from prison, Estes was convicted of trafficking methamphetamine in Stillwater in 2014 and given a 25-year prison term from which he was paroled in 2020 after serving about six years, DOC records show.