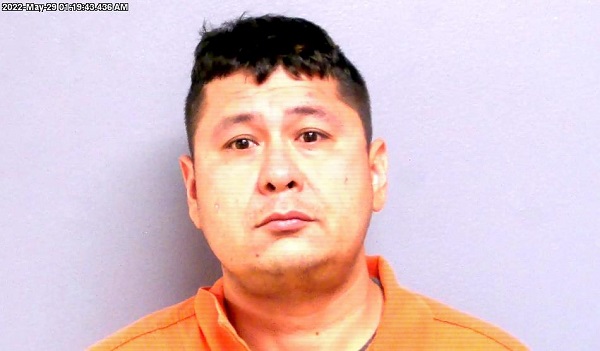 (Stillwater, Okla.) — A Stillwater man has been jailed on $30,000 bail on charges of breaking into his ex-girlfriend’s house, being a felon in possession of seven firearms, and firing a loaded 9 mm handgun in the general direction of a car being driven by his ex-girlfriend in a residential area on Memorial Day weekend.
Ali Jordan Lalehparvaran, 38, has been ordered to appear in court on July 11 when he can seek a preliminary hearing. If convicted of all three counts, Lalehparvaran could be given a life prison term plus 10 years and six months, according to the charge filed last week.
Lalehparvaran was arrested at his residence on the Saturday before Memorial Day at 2:22 am, about an hour after Stillwater Police Officer Robbie Frazier was dispatched to the 400 block of S. Burdick on a shots-fired call, an affidavit said.
“Dispatch advised another individual was near 6th and Lowry stating she had been shot at. I immediately responded to this area as I was only a few blocks away,” Stillwater Police Officer Dusty Behne wrote in an affidavit.
A woman “told me her ex-boyfriend, Ali Lalehparvaran, who goes by his middle name Jordan, had come over to her house tonight,” uninvited about midnight, the officer alleged in his affidavit. She said he was wanting to fight her boyfriend and her adult son, the affidavit alleged.
The woman said “she was able to coax him out of the house without violence. She said Ali left but continued to circle the block around her residence until approximately 1 am in a silver or dark-colored SUV she knew to be a rental vehicle,” the affidavit alleged.
She said she took her son and his friend back to the friend’s apartment and was returning home when her boyfriend told her on the phone “Ali was back and that Ali stated he had a gun,” the affidavit alleged.
The woman said as she arrived, her boyfriend “was running away from her house with Ali following him in his vehicle. She stated Ali turned around and was chasing her around the block in his vehicle. At some point, Ali stopped following her. She drove past Ali’s house and saw him in his driveway near a shed just west of the house. (She) said she turned onto the next street west of his house after hearing what sounded like a shot from a gun.
“(She) later said she did not see a gun but knows what they sound like and knows Ali to have several guns in his bedroom. She believed Ali shot at her while she was driving away from his residence. A 9 mm shell casing was located on 5th Ave. just south of the driveway where Ali was said to be standing just prior to the shot being fired.
“Several houses, an apartment complex, a US and state highway are in the immediate vicinity of Ali’s residence. Ali firing a gun in this area poses a risk to residents and passing motorists,” the Stillwater officer alleged in his affidavit.
“She stated their relationship began sometime in June 2018 and ended on either May 17 or 18, 2022,” when she told him it was over, the affidavit alleged. She had no reported injuries, the affidavit said.
When Lalehparvaran’s residence was searched, “I located two handgun cases in a bedside dresser. I was later told one of the cases matched one of the weapons found earlier in the search,” the officer alleged in his affidavit.
Lalehparvaran has been accused of possessing two handguns, two shotguns and three rifles including an AK 47, after having been convicted in Tulsa County in 2011 of pointing a firearm, assault and battery with a dangerous weapon, discharging a firearm into a dwelling and possessing a sawed-off shotgun. He was given three concurrent seven-year prison terms plus one concurrent two-year prison term and was released in 2015 after less than three and one-half years’ incarceration, Department of Corrections records show.