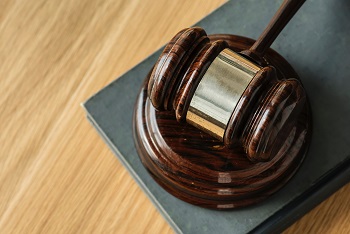 (Stillwater, Okla.) — A Stillwater man, who remains free on $10,000 bond, has been ordered to appear in court on May 4 on a felony charge of domestic assault and battery of his fiancée in the presence of a 10-year-old girl and a one-year-old boy in the family’s camper.

Cody Randall Swarb, 39, was previously convicted of two separate misdemeanor charges of domestic violence in the presence of minor children in 2014 in Pottawatomie County and placed on probation for one year, court records show.

If convicted in Payne County of felony domestic assault and battery in the presence of minor children as a subsequent offense, Swarb could be given as much as a five-year prison term and a $7,000 fine, court records show.

Swarb was arrested by Payne County Sheriff’s Deputy Dalton Ross at his workplace two days after an altercation occurred at his camper east of Stillwater, court records show.

When the deputy was sent to the camper at 10:42 p.m. on March 4, the alleged victim said that her fiancé had already left on foot, according to Ross’s affidavit.

The woman refused to tell the name of her fiancé “due to fear of him getting in trouble,” the affidavit said.

She said after he “began to belittle her and make inappropriate comments to her,” a physical altercation ensured over the keys to the truck, for which they do not have insurance and Swarb does not have a license to operate, the affidavit alleged.

“She said she grabbed the keys to the vehicle because he always tries to leave when he is mad and she knows how he drives when he is angry,” the affidavit said.

The woman said that her fiancé “wanted the keys and tried to bite her hand so she would release them,” the affidavit alleged.

“She said she hit the male in the mouth. She told me the male had his body holding her legs down and used his forearm to hold her and try to get the keys,” the deputy alleged in his affidavit.

“She said at one point the male was pushing on her back and pushing her upper body towards her lower in a sit-up position,” while she was gasping for air, the affidavit alleged.

“She told the male she was having trouble breathing. She said at that time the male stopped,” the affidavit alleged.

“Through training and experience I have, I know that the body goes into a survival mode during strangulation. Strangulation can also cause the victim to panic. The feelings she expressed are common in victims of domestic violence by strangulation,” the deputy wrote in his affidavit.

“She refused to fully cooperate with my investigation due to fear of the male going to jail. She said he has a history of domestic violence from a previous relationship…She informed me she did not want to pursue charges.

“I attempted to explain the seriousness of the domestic (incident) that had occurred, and that he was doing permanent damage to her every time she is strangled or that airflow is limited for her.

“She was given a domestic violence packet. I told her that the report I would be writing was an informational report that I am required to do by my agency,” the deputy wrote in his affidavit.

On that night, her fiancé was not located, but the tag to the couple’s truck came back to Cody Swarb, the affidavit said.

After the alleged abuser was located at his workplace on March 6, Swarb said that he and his fiancée got into a verbal dispute at their residence and he wanted to leave, the affidavit said.

“He informed me that he had consumed three beers that were in his fridge and knew he did not have a license to drive,” the deputy alleged in his affidavit.

Swarb said that as he walked to the door of the camper, his fiancée “grabbed his keys that were located on his belt loop — he said that she ripped them off breaking the belt loop,” the affidavit alleged.

“He said that he did not remember much of what happened during the physical altercation…He said he was just trying to get his keys,” the affidavit alleged.

Swarb had two scratches on his face, a small mark on top of his head, a bite mark on the inside of his right upper arm and a scratch on his right cheek that had started to scab over, the affidavit said.

“He said after he noticed he was bleeding, he left the residence and went to a neighbor. I asked him why he did not come out and speak with any of the deputies on the scene. He told me he had been drinking and went back to the residence approximately 30 minutes after we left,” the deputy alleged in his affidavit.

Swarb said that his fiancée “had left him recently for approximately three weeks, but returned on March 1,” which was three days before the altercation, the affidavit alleged.