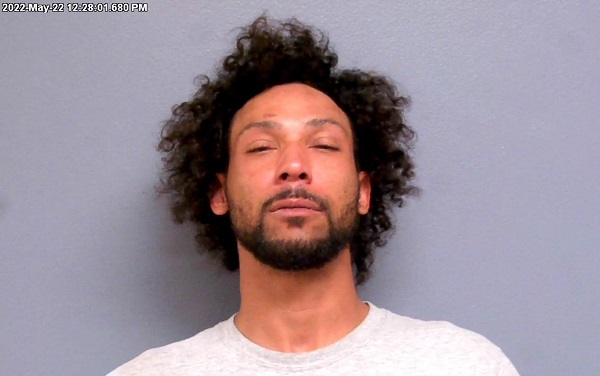 (Stillwater, Okla.) — A Stillwater man on probation for drug possession has been freed on $7,500 bail pending a July 27 court appearance on charges of choking his girlfriend and punching her daughter in the face.
If convicted of his latest charges, Marquis Charles Rogers, 40, could be incarcerated for 10 years plus 90 days and fined $21,000, court records show.
Payne County Sheriff’s Deputy David Rose had his body camera on when he was sent at 12:38 am on May 22 to the 4600 block of Furman Drive in rural Stillwater on a report of a physical domestic incident, according to his affidavit.
Rogers’ girlfriend “had a bruised and swollen left eye, a busted lip, blood in her nose, and marks on her neck that appeared to be a fresh injury,” the deputy wrote in his affidavit.
She said she was at a pow-wow with her daughter when she heard that Rogers had another woman at their house, the affidavit said.
After she and her daughter arrived home, she said that she “began speaking with Marquis (Rogers) and the woman with him, and Marquis began to get very angry and punched her in the face and the back of the head,” the affidavit alleged.
She said, “she was unsure what Marquis hit her with when she fell to the ground and was getting hit in the back of the head,” the affidavit alleged. She said, “Marquis finally stopped and left in a gray vehicle with the other female to an unknown location,” the affidavit alleged.
She said she asked her daughter to call for help and an ambulance, the affidavit said.
Her daughter said, “she was with her mom, and they had all gone inside to talk about what was going on, but that Marquis got angry and hit (her mother) in the lip with his hat causing it to bleed,” the affidavit alleged.
Her daughter “told me she tried to tell Marquis to stop, but Marquis continued to hit” her mother, the deputy alleged in his affidavit. She said, “she saw Marquis put (her mother) in a headlock and began choking her and stating he was going to kill her,” the affidavit alleged.
Her daughter said, “she tried to pull Marquis off (her mother), but Marquis turned to her and punched her in the left eye,” the affidavit alleged. Her daughter had a swollen cheek on the left side of her face, the affidavit said.
Her daughter “told me Marquis finally left,” the deputy wrote in his affidavit. According to jail records, he was found and jailed about 12 hours later at 12:30 pm on May 22. Both women obtained emergency protective orders against him the next day, court records show.
According to court records and the state Department of Corrections, Rogers had been placed on 20 years’ probation in 2016 for drug possession with intent to distribute in 2013 in Grady County. Rogers had previously been convicted of second-degree burglary and possession of a stolen vehicle in 2002 in Tulsa County, for which he served about half of two concurrent three-year prison terms.