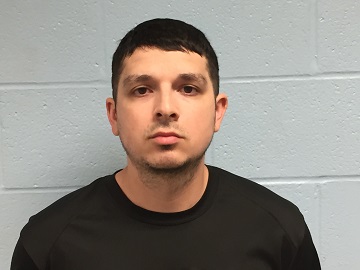 (Stillwater, Okla.) — A Stillwater Junior High School teacher accused of sexting a 16-year-old girl, who had been his student when she was 14, has been released from the Payne County Jail on $50,000 bail — with the condition that he have no contact with her or her family including by third party and electronic transmissions.

Alberto Morejon IV, 27, who is also a baseball coach at Stillwater Junior High, could be given as much as a 10-year prison term and a $10,000 fine if convicted of engaging in sexual communication with a minor by use of technology, according to court documents filed by prosecutor Debra Vincent last week.

Morejon entered an innocent plea at his arraignment this week when he appeared with defense attorney Irvin Box of Oklahoma City. Morejon has been scheduled to return to court on July 6 when he can seek a preliminary hearing on the felony charge.

Morejon was arrested on May 19 at 7:06 p.m. after a concerned parent contacted Stillwater police on May 12, a news release said. Morejon has been scheduled to be arraigned this week on the felony charge, court records show.

Stillwater Police Detective Sherae LeJeune alleged in an affidavit that Morejon began communicating with the girl in 2018 when she was a 14-year-old student of his. “The communication continued over two years,” the affidavit alleged.

During a May 15 interview at the child advocacy center, the girl “disclosed that she and Alberto had text and ‘photo messaging’ conversations on Instagram. The content began innocuous, but eventually became flirtatious in nature,” the affidavit alleged.

“Alberto requested (the girl) send unclothed images of herself to him. Alberto also told (the girl) they could meet together at a residence accessible to him where they would not be found,” the affidavit alleged.

The girl and her guardian “consented to participating in a controlled conversation with Alberto for further investigation in this case,” the affidavit alleged.

On May 15 at about 6 p.m., the detective, posing as the girl, “began a controlled conversation on Instagram with Alberto with the assistance of (the girl) for picture messaging,” that began with her saying she was alone at home, the affidavit alleged.

“Alberto responded by saying ‘You trying to find something to do. Or find someone to do?’ He was invited over. Alberto said he still had access to the residence where they could be alone and he asked what they would do together,” the affidavit alleged.

The detective, posing as the girl, responded “by asking if he had ever been with a younger girl. He responded with ‘You’re a virgin though…you ain’t even ready.,'” the affidavit alleged.

“Alberto advised he could not find a reason to sneak out of the house at that time because he had been inside all day due to the rainy weather. He stated ‘I can on nights I’ve been outside and have an excuse to stay outside. But today I’ve been in all day since it’s been raining. Lol,'” the affidavit alleged.

The detective, who said she decided to end the conversation at that time, added that the girl “was instructed to have no communication with Alberto until she and I could continue at a later date,” the affidavit alleged.

When the detective and the girl met again on May 19, the affidavit alleged, “Over the past four days Alberto sent multiple picture messages to (the girl) that she left unopened.”

The detective wrote in her affidavit, “At 4:32 p.m. I initiated conversation with Alberto again,” with picture messaging.

“Each picture Alberto sent was of a different area outside of his home with the message typed on the picture. I responded in the same manner with my message written over a picture,” of the girl, the detective alleged in her affidavit.

“I started by asking what he was doing. Alberto expressed how worried he was about (the girl) not responding back to him. He said he was outside doing yardwork. I asked if he could leave since he was outside like he said he could in the previous conversation. Alberto advised his vehicle was too noticeable to park at her house.

“I advised I had a vehicle. He said there could be a tracker on the car or (her) mother could come home early. I offered to meet him in the parking lot of Walmart. He again said he could not. I told Alberto that if he was so concerned about getting caught, then he did not have to meet.

“He responded by saying how fun it would be for (the girl) to perform a specific sexual act on him, but it would be risky to meet. He provided instructions on how to perform oral sex. During this conversation there was nothing identifying Alberto as the person I was talking to other than the outside of his residence.

“I asked if it was even him I was talking to. He responded by taking a picture of his lower body and the caption ‘Lol yesss.’ He was wearing blue gym shorts and blue shoes with white trim. He also sent a picture of himself grasping his penis over his underwear with his shorts pulled down,” the affidavit alleged.

“At that time, I requested assistance from the Special Projects Unit,” which responded to Morejon’s residence while the detective, posing as the girl, “continued to speak with Alberto,” she alleged in her affidavit.

“I was informed by the SPU that Alberto was observed at his home wearing the same clothing in the pictures I received. Alberto left his residence in the Jeep that was also seen in the pictures. He was stopped on traffic by a marked patrol unit and placed under arrest for soliciting sexual conduct or communication with a minor by use of technology,” the detective alleged in her affidavit.