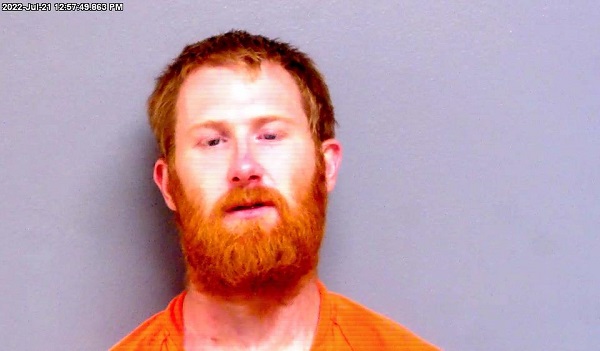 (Stillwater, Okla.) — A 30-year-old rural Drumright man has been jailed on $30,000 bail pending his arraignment Tuesday with an attorney on charges of domestic violence by strangulation, resisting Payne County sheriff’s deputies, and attempting to escape, all on July 21.
Due to his prior convictions for domestic violence in Creek and Pawnee counties, Kyle James McDonald could be given a prison term in the range of 10 years to life if convicted of sitting on his partner, choking her and placing a pillow on her face in the presence of their children at their rural Payne County residence, court records show.
McDonald could also be given two years in jail if convicted of resisting two Payne County sheriff’s deputies and attempting to escape from them, court records show.
McDonald was arrested at 9:13 am on July 21 in the 1200 block of N. Oak Grove Road after he was tased by three deputies and ran into the woods where he was caught, Payne County Sheriff’s Deputy Scott Hopper alleged in an affidavit filed last week.
The mother of his children said, “she was asleep when Kyle came into the bedroom and slapped her two or three times in the face waking her up,” the affidavit alleged.
When she asked, “what was that for?” she said, “Kyle responded with ‘because you were a b…. last night,"” the affidavit alleged.
She said, “Kyle was upset because she had gotten mad at him for driving around with the kids without a car seat and leaving the kids home alone,” the affidavit alleged.
She said, “she tried to get her phone and that when she did, Kyle started to choke her,” while one of their children was in the room, the affidavit alleged.
She said, “Kyle stopped choking her, then put a pillow over her face, holding it there for two to three minutes,” the affidavit alleged.
When he let her go, she said she was able to text a relative who called 911, and then she was able to leave, the affidavit alleged.
She said, “when she returned home, Kyle was in his car waiting for her at the intersection of Highway 33 and Norfolk,” the affidavit alleged.
She obtained an emergency protective order against him the day after charges were filed against him, court records show.
Court records show that McDonald had been convicted in 2013 of domestic assault and battery in Cleveland for which he was placed on probation for one year in Pawnee County. McDonald was also convicted in 2017 of felony domestic assault and battery, as well as misdemeanor assault and battery on a Mannford police officer, for which he was placed on three years’ probation in Creek County for the felony that was later revoked to eight months in jail, and one year of probation for the misdemeanor.
In Payne County, five months ago McDonald was placed on one year’s probation with an order to complete an anger management class and perform 16 hours of community service for throwing two handfuls of dirt in the face and head of a female employee at a Cushing loan company on Dec. 31, 2019, court records show.