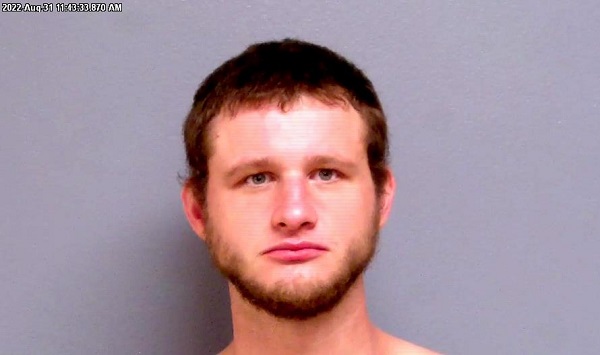 (Stillwater, Okla.) — A Cushing couple were arraigned Tuesday on felony charges of possessing nearly six pounds of marijuana with intent to distribute, a Ruger AR-15 rifle during the commission of a drug offense, a cut-off saw stolen from a Tulsa company, and a 380-caliber pistol with a removed serial number, all allegedly seized during the service of a search warrant at their rural residence by Payne County Sheriff’s Investigator Brandon Myers.
Tyler Don Watkins, 29, who previously lived in Drumright, remains in the Payne County Jail on $10,000 bail pending an Oct. 3 court appearance at which he can seek a preliminary hearing. Shelbi Breann Watkins, 26, was released from jail on $5,000 bail on Sept. 6 and ordered to return to court on Nov. 7 when she can seek a preliminary hearing. If convicted of all of their charges, the couple could each be given 27 years in prison and a $110,500 fine.
“Due to safety concerns, the Stillwater Multi-Jurisdictional Special Operations Team secured the residence,” located west of Cushing in the 7200 block of W. Combs Drive at 9:50 am on Aug. 31, according to the sheriff’s investigator.
“Upon the team’s arrival using a large 6-wheeled armored personnel carrier marked ‘Sheriff’ in large black letters down each side of the vehicle and numerous marked sheriff’s office vehicles utilizing their emergency vehicles,” the couple along with their children were outside the house in the yard, the affidavit alleged.
“They both ran from the law enforcement team approaching and entered the residence. After a short time, Tyler exited the rear of the home and was met by team members. Shelbi would not come out of the house,” until contacted by a relative by phone, the affidavit alleged.
“Upon completing the search, we located 5.9 pounds of marijuana,” which was found in a safe room in the residence, in a freezer in the garage, in the couple’s bedroom and in a fifth-wheel camper parked outside the home, the investigator alleged in his affidavit. The investigator also found a metal pan in the freezer with a thin layer of what appeared to be marijuana concentrate or “wax,” the affidavit alleged.
“Also, in the safe room, I located methamphetamine, large amounts of syringes, evidence of methamphetamine use, scales and baggies,” the investigator alleged in his affidavit.
In the safe room, the investigator found 11 firearms: a Ruger AR-15 that was magazine and chamber-loaded, an AK-47 style rifle, four more rifles, a shotgun, and four handguns, one of which had the serial number ground off, the affidavit alleged.
“In the southeast spare bedroom and safe room, I located numerous social security cards, identification cards, and a passport, most of which are in different names,” the investigator alleged in his affidavit.
“With the cards in the spare bedroom, I found a prescription pill bottle in Shelbi Watkins’s name and a round leather case containing methamphetamine and methamphetamine smoking pipes,” the investigator alleged in his affidavit.
The investigator also found in the yard a welder with the serial number removed and a stolen cut-off saw belonging to a Tulsa business valued at just under $2,000, the affidavit alleged.
ATF Agent Brian Anderson and Agent in Charge Kevin Brown conducted a function test of the AK-47 style rifle found in the safe room, which “showed that it is a fully automatic machine gun,” the affidavit alleged.
“In a cabinet drawer in the safe room, we located an assortment of live ammunition in different calibers. There were hundreds, if not thousands, of rounds in this single drawer. We found an RG industries .22 caliber revolver loaded with four rounds,” in a small leather holster behind the washing machine, the investigator alleged in his affidavit.
The couple “both have their medical marijuana cards, yet the amount found inside the residence is five times the amount they can lawfully possess,” the affidavit alleged.
“They willfully delayed and obstructed the special operations team and me by running into the house, away from marked law enforcement, while executing a search warrant at their residence,” the investigator alleged in his affidavit.