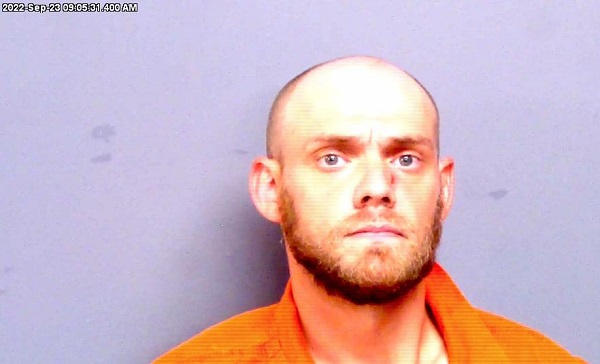 (Stillwater, Okla.)  — A Perkins man on probation for passing a forged check has been charged with breaking into the OSU Student Store from which $7,075 worth of electronics was stolen, according to an affidavit.
Nicholas Ryan Brown, 31, was ordered jailed on $20,000 bail pending his arraignment this week on a second-degree burglary charge along with possessing marijuana and a glass smoking pipe with drug residue.
If convicted of all three counts, Brown could be incarcerated for nine years and fined $12,000, according to the charge filed last week.
Brown was arrested in the OSU Student Store in the Student Union on Sept. 23 at 6:30 am — 29 minutes after a burglar alarm went off, an affidavit said.
“He was sweating profusely and claimed he had fallen from the railing to the inside of the store. He advised after he fell, he attempted to leave, but all the doors were locked, and he could not get out. He advised he had been let into the Atherton Hotel and became lost and wandered into the Student Union,” OSU Police Officer Chance Simpson wrote in an affidavit.
Brown “advised he was injured from the fall and was complaining of hip and leg pain. After being examined by LifeNet, Brown wanted to be transported to the SMC ER due to his claimed injuries.
“Surveillance video showed Brown entering the store through a second-floor window. He then climbed onto the window ledge inside the store and made his way to the spiral staircase. He then walked down the stairs into the first floor of the store.
“Brown was carrying one single black backpack with the OSU logo on it. Brown makes movements throughout the store including near the Orange Tech area and around the electronics sales area. He is later seen going back up the spiral staircase with at least three black backpacks.
“He crawls back up onto the ledge and tries to exit out the window he originally entered. For whatever reason, he is unable to exit out the window. He throws the backpacks to the ground floor below, then jumps down from the second-story height.
“He hits the ground and falls but is able to get up and walk away. Officers located him inside the store shortly after but did not have knowledge of the backpacks and did not see them while on scene. OSU Student Store staff located the backpacks shortly after officers left the scene.
“Inside the backpack Brown was seen entering the store with was his wallet, Oklahoma driver license and a Gatorade bottle. Inside the other two backpacks were four Apple brand iPads, two Apple MacBooks, one Apple pencil, and one pair of Soul brand headphones. Bookstore staff confirmed some of the devices were stored inside the Orange Tech area and the remainder of the devices had been on a tabletop in the electronics area. Total estimated loss for the electronics was $7,075.89.
“Also inside Brown’s backpack was a glass pipe with methamphetamine residue and three containers of marijuana,” the affidavit alleged.