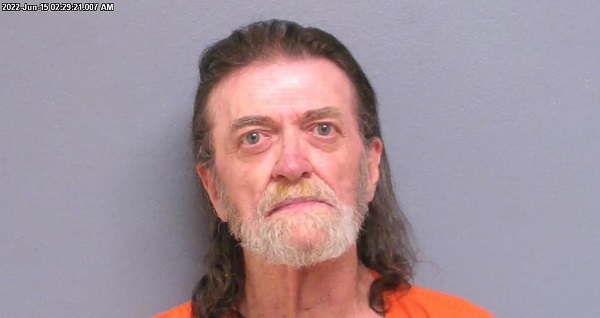 (Stillwater, Okla.) — A 67-year-old Perkins man has been jailed on $5,000 bail pending his arraignment Wednesday on a charge accusing him of exposing his private parts while he was in his pickup in the Walmart parking lot in Cushing.
Jeffery Lyn Harris, who previously lived in Yale, could be incarcerated for 30 days to 10 years and fined $500 to $20,000 if convicted of the felony, court records show.
Harris was arrested on June 13 at 9:04 pm, about seven minutes after Cushing Police Officer Alex Gegen was dispatched to the Walmart parking lot regarding “a male touching himself inappropriately with his vehicle windows down,” in row 12 close to the building, an affidavit alleged.
“Upon reaching the passenger door, I observed a male looking at a phone that was in his left hand with what appeared to be some type of pornography,” while touching himself with his right hand, the officer alleged in his affidavit.
“It should be noted that there were multiple vehicles in the parking lot with multiple people walking around,” the affidavit said.
When Harris was advised he was under arrest for indecent exposure, he stepped out of his vehicle with his private parts still exposed, the affidavit alleged.
Harris was then covered up and placed in Sgt. Carson Watts’ patrol car, the affidavit alleged.
“Harris also had a dog that was in the vehicle, which was ultimately taken to the Cushing Animal Shelter and his vehicle was secured and remained in the parking lot,” the affidavit alleged.
A woman said that five individuals including two juveniles had seen Harris in his vehicle touching himself, which was recorded on a video that was sent to the police officer, the affidavit alleged.