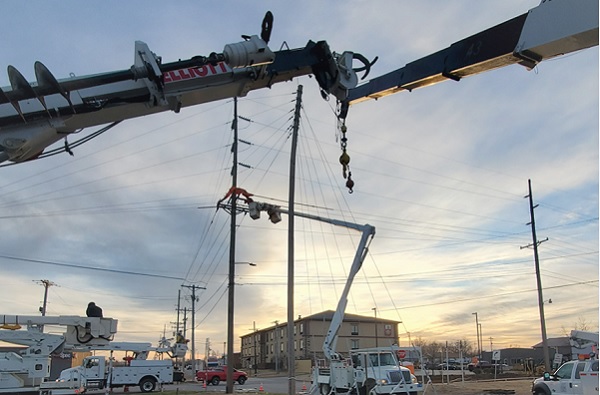 (GRDA/Cushing) — Providing reliable, abundant, competitively priced electricity, on a not-for-profit basis, to 49 million Americans. That is what the nation’s public power utilities accomplish every day.

The Grand River Dam Authority is among those 2,000-plus utilities and is proud to join with the American Public Power Association (APPA) in recognizing October 2 through 8 as “National Public Power Week.” Each year, this week is set aside to recognize the many contributions made by public power utilities, like GRDA and Cushing. These utilities come in all shapes and sizes. Some, like GRDA, are larger systems, generating and transmitting electricity to customers across a large region. However, most are municipally owned systems, like the 15 Oklahoma public power communities that receive their wholesale power from GRDA.

In all these municipal systems, both large and small, the process works the same: communities own and operate their own electric distribution system and revenues from the sale of electricity help to fund other city services. Parks, streets, police, and fire protection can all benefit financially from the locally owned electric utility. In fact, every GRDA public power community in Oklahoma, no matter the size, contributes hundreds of thousands of dollars (some even more) to their respective city general funds. In other words, public power is not just about not-for-profit, reliable electricity service, it’s also about quality of life. And it’s all done without utilizing tax dollars.

As the nation’s 25th largest publicly owned electric utility (in terms of generation), GRDA is proud to be a part of the public power process and proud to share its many benefits that positively impact customers, stakeholders, and the people of Oklahoma. While the electricity helps power the state, GRDA’s support of economic development, ongoing environmental stewardship efforts and efficient operations help to enhance quality of life in all the areas it touches.

“GRDA is very proud of its public power partnerships with Oklahoma communities like Cushing,” said GRDA Corporate Spokesperson Justin Alberty, “and public power week is a great opportunity to recognize just how beneficial public power can be to these communities. It benefits thousands of Oklahomans every day.”

The public power partnership between Cushing and GRDA first began in 1953.

Closer to home, the 15 Oklahoma communities that purchase wholesale electricity directly from GRDA combine to return approximately $36 million annually to city general funds. Those are important dollars, especially at times when tax receipts may be lower and other funding sources are not available.

GRDA is Oklahoma’s largest public power utility, funded by revenues from electric and water sales instead of taxes. Each day, GRDA strives to be an “Oklahoma agency of excellence” by focusing on 5 E’s: employees, electricity, economic development, environmental stewardship, and efficiency.