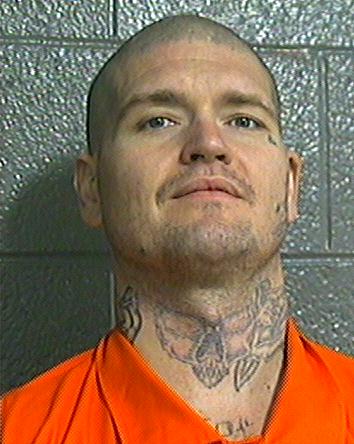 (Stillwater, Okla.) — A former Cushing man, who has a record of property crimes in four counties, has been given an eight-year prison term for stealing a pickup truck from the parking lot of the Cimarron Casino in Perkins.
The latest sentence for Jerry Dale Bennett, 30, was ordered last week by Payne County Associate District Judge Stephen Kistler to run concurrently to a nine-year prison term that he has been serving for the past three months for second-degree burglary in Tulsa County in 2020.
The victim reported on Aug. 17, 2021, he had parked his unlocked pickup truck that had a dirt bike in the bed at 5:30 pm — with the truck keys in the driver’s side floorboard, according to Iowa Tribal Police Officer Chad Brown.
When the victim came out of the casino at 6:20 pm, the truck along with the dirt bike was gone, the affidavit said.
Surveillance video showed that at 5:58 pm a car, which was driven by a Cushing woman with a male passenger, parked three spaces from the truck, the affidavit said.
On the video, “I observed the male walk up to the passenger side of the truck and look closely at the dirt bike in the bed of the truck. The male then turned and walked away from the truck and entered the casino with the female through the north casino entrance,” the Iowa tribal officer wrote in his affidavit.
“I observed the male and female walk around the casino and play multiple different slot machines,” the Iowa tribal officer wrote in his affidavit.
At 6:07 pm, the male left the casino, walked straight to the truck, opened the door, sat in the driver’s seat and shut the door, before the truck left at 6:08 pm, the affidavit said.
The next day, the truck owner said, “that he had some information about the suspects that stole his truck,” the affidavit said. The truck owner said that “he may have found the female suspect on the social media platform Facebook,” the affidavit said.
When the Iowa tribal officer looked at the Facebook profile with many different pictures of the woman, he said, “she has the same tattoo on her right forearm as the suspect in the surveillance pictures,” and a similar tattoo on her right foot, the affidavit said. Her car matched the description of the suspect vehicle, the affidavit said.
During an interview with the Cushing woman, who was not charged in the case, she said that she had known Bennett, who had recently gotten out of prison, for about 18 years, the affidavit said. She said, “he came to her house one time, and now he will randomly pop in,” but “she isn’t comfortable with him because she knows he steals,” the affidavit said.
She said, “he came to her house the day of the incident and wanted to go to the casino in Perkins,” so she drove him there, the affidavit said.
“She said he never said anything about stealing it, but when they got out of her vehicle, he walked over and was looking at it,” the affidavit said.
She said that when she left the casino and went to her car, she couldn’t find Bennett and the truck was gone, the affidavit said.
Asked where Bennett lives, “she said he flops,” but she didn’t know where he was, the affidavit said.
Bennett had been in prison for about a month on his Tulsa County sentence when he was arrested in the Payne County truck theft, court records show.

According to the Oklahoma Department of Corrections, Bennett has multiple prior felony convictions for property crimes in Payne, Pawnee, Okfuskee and Tulsa counties.