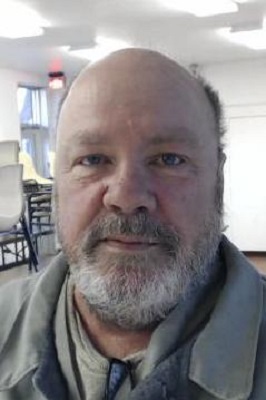 (Stillwater, Okla.)  — A 60-year-old ex-convict has been jailed on $30,000 bail pending a Sept. 7 preliminary hearing on charges of exposing himself at an apartment complex in Stillwater, threatening to beat up a woman who called police, spray-painting a door as well as two windows there, and being intoxicated in public.
If convicted of his four-count charge, Gary Duane Mebane, who got out of prison three years ago, could be incarcerated for 11 years and seven months, court records show.
Mebane was arrested at 6:04 pm on June 19 at Wellspring Apartments, less than an hour after Stillwater Police Officer Josh Rudluff was sent on a vandalism call to the complex where Mebane was living, his affidavit said.
A tenant said, “Gary (Mebane) had just gone around and spray-painted a door and window,” at a neighbor’s apartment, the affidavit alleged. The apartment manager, “told me he had vandalized the property and she wanted him arrested,” the officer alleged in his affidavit.
“Gary had spray-painted his entire door; there were also two other doors that I observed had white spray paint on them. I was told that he did those as well. There were two windows that had either spray paint or shoe polish on them. The building sign above Gary’s apartment also had black spray paint on it that was caused by Gary,” the officer alleged in his affidavit.
The property manager “told me that Gary had also exposed himself to several people in the complex,” the officer alleged in his affidavit. “Several people on scene told us that they believed Gary was impaired by drugs or alcohol due to his behavior…He was asked if he had any alcohol and he stated he was at (a bar) earlier and had consumed alcohol before a pool tournament,” the affidavit alleged.
After the officer talked to several residents including a man who said that Mebane was standing in Mebane’s doorway when he pulled down his pants, “I had decided that I was going to arrest Gary for indecent exposure but wanted to ask him about it first,” Rudluff alleged in his affidavit.
Mebane “told me he wished to speak to his lawyer, so I discontinued asking any further questions,” the officer alleged in his affidavit.
On the drive to the police department, “He told me that he would ‘start shooting the g.. d…. windows outta this f…… place.’ He also made a comment that the place needed set on fire, and he would show somebody how to do it. I told him he doesn’t want to set the building on fire, and he stated ‘I’ll blaze that m….. f…..’ He then turned his attention to being upset,” at the woman who called police, the officer alleged in his affidavit.
“He stated, ‘I’m going to beat that f…… b….boy she going to be bruised, dude. She ain’t going to be able to walk.’ He went on to say that ‘her ribs are going to be torn up. I’ll break her f….. arm,"” the affidavit alleged.
“He also made a comment about hitting her in the nose and breaking some of her toes. I asked if he was planning this when he got out of jail and he said yes, today when he got out. He continued to ramble about finding out if she can fight like a man and said he was just going to hit her three or four times.
“He said he was going to hit her a couple times in the face and ribs and that we would get the call, but he would be in Kansas City. Right before we got to the jail, he told me ‘she’s f….. going down, you’ll have to f…… scrape her f…… ass off the asphalt,” and commented where she worked, the affidavit alleged.
“Once in the jail, he continued to make crude remarks to the two female detention officers. He was confrontational the entire time, and one time made a comment about wanting to fight us when the cuffs came off,” the officer alleged in his affidavit.
“He made a comment about (a relative) better bail him out and that she had one minute to do so, or he would kill her,” the affidavit alleged.
According to the Oklahoma Department of Corrections and court records, Mebane has a 34-year-old criminal history including convictions for:
* two counts of assault and battery on a police officer, one count of mistreating a police dog, two counts of assault with a dangerous weapon and one count of assault and battery with a dangerous weapon, all in Tulsa County in 2016, for which he was given six concurrent 10-year prison terms, but only served about two years and seven months before being released in August of 2019;
* drunk driving and attempting to elude police in Payne County in 2009 for which he was given a five-year suspended sentence except 30 days in jail in 2010;
* assault and battery on a police officer in Kansas for which he was paroled in 2005;
* second-degree burglary in Payne County in 1988 for which he was given a two-year prison term and served 22 months;
* drunk driving in Payne County in 1986 for which he was placed on five years’ probation in 1988.