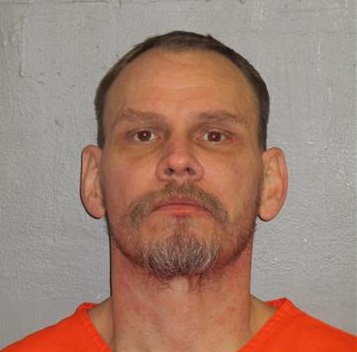 (Stillwater, Okla.) — An ex-convict, reportedly found under a vehicle in the yard of a rural Stillwater business where a fence was cut, was charged this week with second-degree burglary, along with possession of a drug and drug paraphernalia.

Michael Paul Heldenbrand, 47, of Mustang, who has a criminal record in five counties, was being held in the Payne County Jail on $60,000 bail pending an Oct. 27 court appearance on a three-count charge, court records show.

Heldenbrand was arrested at 12:41 am Friday in the 5100 block of S. Perkins Road by Payne County Sheriff’s Deputy David Sloan in an investigation aided by Oklahoma Highway Patrol Troopers Steve Burroughs and Ryan Long, as well as Perkins Police Officer William Bowen, an affidavit said.

The deputy was sent at 8:49 pm Thursday to the area after a man heard was sounded like a chain link fence being cut near his residence, the affidavit said.

“I located a hole cut in the north fence approximately 3 feet by 4 feet. I went through the hole in the fence. Inside the fenced yard were multiple vehicles.

“Trooper Long and I began searching the yard of the business,” where the deputy’s K-9 partner Caine began pulling hard to the north, Sloan wrote in his affidavit.

“I was looking under vehicles as I went by them. I observed what appeared to be a glove laying on a pile of clothes…I began giving Heldenbrand commands to show me his hands and to crawl out from under the vehicle. Trooper Long had to physically assist Heldenbrand to his stomach and was able to handcuff Heldenbrand behind his back.

“I observed a Kobalt impact driver and a Kobalt reciprocating saw with a metal cutting blade laying next to Heldenbrand,” the deputy wrote in his affidavit.

“Heldenbrand advised me he came to the yard to take car parts. Heldenbrand further advised me the Dodge pickup with the trailer (by the fence line) was his,” the deputy alleged in his affidavit. Although Heldenbrand allegedly said another male was with him, none was found, the affidavit said.

“Trooper Long advised me Heldenbrand advised him when they saw the lights from my patrol car, they exited the building and began going north. Heldenbrand stated he hid under the vehicle where he was found,” while the other man continued north, the deputy alleged in his affidavit.

“Trooper Long advised me he located syringes loaded with a clear liquid inside the Dodge…I observed multiple implements of burglary. I seized the Kobalt tools laying next to Heldenbrand, a three-foot pry bar and a pair of wire cutters,” the deputy alleged in his affidavit.

According to the state Department of Corrections, Heldenbrand apparently got out of prison eight months ago after serving about one-third of a three-year sentence for unauthorized use of a vehicle in 2017 in Cleveland County where he had also been convicted of two counts of possessing stolen property in 2007 for which he served about eight months of two concurrent two-year prison terms.

Heldenbrand also served about one-fourth of a four-year prison term he was given in 2016 for violating the probationary sentence he had been given in 2014 for endangering others while eluding a police officer in Mustang in Canadian County.

That Canadian County sentence ran concurrently to two four-year prison terms he was given for methamphetamine possession in 2016 and false declaration of pawn in 2009 in Oklahoma County where in 1995 he had received a three-year probationary sentence for drug possession with intent to distribute.