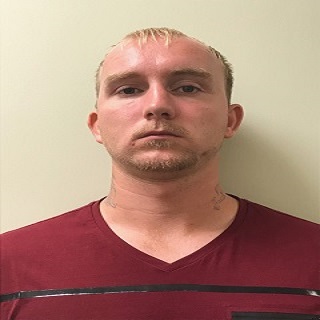 (Stillwater, Okla.) — An ex-convict has been jailed on $25,000 bail pending his arraignment Tuesday on a Payne County charge of stealing a company pickup truck from a Cushing trailer park — five months after he was released from the Regimented Inmate Discipline (RID) prison boot camp where he had been incarcerated on two stolen vehicle cases from Creek County.

The latest arrest for Jesse James Eychner, 24, of Perkins occurred 13 days after he got out of the Wagoner County Jail on $12,500 bail on charges of being a felon with a black .22 revolver in his pocket, as well as possessing the drug hydrocodone on Dec. 31, 2019, a two-count case on which he is due to be arraigned on March 11.

Eychner was arrested at 9:31 a.m. on Feb. 16 in the pickup truck parked in the back yard of a Cushing house in the 500 block of S. Steele, according to an affidavit by Cushing Police Officer Cody Carpenter.

A Cushing man had reported at 7:49 a.m. on Feb. 16 that he had last seen his company truck — left unlocked with the keys inside it — at about 7 p.m. the previous night in the trailer park, the affidavit alleged. He said “he heard a truck start up late last night, but did not think it was his company truck because there were several trucks in the lot,” the affidavit alleged.

About 45 minutes later, the company owner called police to report that the tracking software showed the truck was in the area of 5th and Steele in Cushing, possibly parked in an alleyway since it wasn’t showing on the road, the affidavit alleged.

Seven minutes later, the Cushing officer was traveling south on Steele Street when he saw the white pickup with red racing stripes on the tailgate with the same Wyoming license tag number as the stolen vehicle — so he followed the vehicle that turned into the back yard of a house in the 500 block of S. Steele, the affidavit alleged.

A woman was in the driver’s seat with her young daughter and Eychner as passengers, the affidavit alleged.

The woman said that between 1 a.m. and 2 a.m. that day, “Eychner knocked on her front door asking if he could park the vehicle in her driveway,” the affidavit alleged. She said at about 8:30 a.m. that day, she went over to the pickup truck to ask Eychner for a ride to the Dollar General store downtown, since it was cold and she did not want to walk, the affidavit alleged.

“I told Eychner I knew he was lying because the vehicle was reported stolen this morning and the driver of the vehicle last saw it at approximately 7 p.m. on Feb. 15, so he could not have bought the vehicle from his friend,” the Cushing officer alleged in his affidavit.

“I also told Eychner the vehicle had a tracker and this was the last spot the vehicle was tracked to. I asked Eychner if he wanted to tell the truth.

According to Creek County court records and the state Department of Corrections, Eychner was convicted on April 4, 2018, in two separate cases of:

* possession of a stolen vehicle and escape from arrest or detention in 2018, for which he was given concurrent prison terms of five years and two years, with the balance suspended on completion of the RID boot camp program;

* two counts of second-degree burglary and two counts of larceny of an automobile in 2018, for which he was given concurrent prison terms of seven years, with the balance suspended on completion of the RID boot camp program that he finished on Sept. 18, 2019.