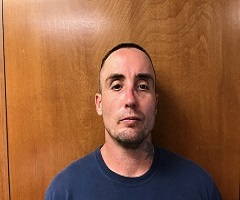 (Stillwater, Okla.) — An ex-convict with an extensive criminal record in Payne and Haskell counties, who was released from prison in 2017, has been accused of repeatedly attacking the mother of his baby at his residence in rural Stillwater.

Jarred Wayne Stubblefield, 40, has been jailed on $20,000 bail pending a Nov. 12 court appearance on two counts of felony domestic violence on Oct. 27 — two months after he was placed on probation for committing three separate property crimes.in Yale.

In his latest case, Stubblefield had picked up his ex-girlfriend at 10 p.m. on Oct. 26 to take her and their 4-month-old daughter to his rural Stillwater residence so he could spend time with the baby, according to an affidavit by Payne County Sheriff’s Deputy David Barnes.

“At approximately midnight, Stubblefield became angry because the baby would not stop crying,” the affidavit alleged.

After the baby’s parents, who do not live together, began arguing, Stubblefield punched the woman in her head and back, the affidavit alleged.

When she broke away and threw a VCR at Stubblefield, he pinned her against the wall and punched her in the mouth and on the head, the affidavit alleged.

The baby’s mother, who was examined at the Cushing hospital, had a one-inch laceration above her left eye and bruised, swollen lips as a result of the assault, the affidavit alleged. She said Stubblefield also choked her and slapped her across the face before he eventually returned her to her residence, the affidavit alleged.

She obtained an emergency protective order on Oct. 30 against Stubblefield on behalf of herself and the baby, court records show.

In her EPO petition, she said she was awakened at midnight “to Jarred frustrated, angry and yelling. He was mad because the baby would not stop crying. He was shouting at her. Me and him began to verbally argue.

“I angered him at some point because he began striking me in the back of the head over and over again numerous times,” she alleged in her petition.

After she threw a VCR at Stubblefield, “he pinned me up against the wall and punched me in my mouth/upper lip. Then he hit me again in he forehead busting it open and blood began dripping everywhere. After that the fighting stopped for the night. But the next morning he began again by hitting me all over my head some more, pushing me down, slapping me in the face repeatedly, choking me out, and holding me down while placing his hand over my mouth.

“He dumped water all over me, taunted me, slapped me in my already busted lip, constantly slapped my glasses off my face, and this was all in front of our 4-month-old daughter. She saw it all and screamed every time he would strike me. At the time I had no cell phone to call for help. I tried to go to the neighbors to get help, but he refused to let me take the baby. Being scared for her is why I stayed there. I didn’t want to leave her with him.

“He has violent offenses already on his case so he doesn’t mind hurting people,” she wrote in her petition for an EPO, which was granted.

Two months earlier, Stubblefield pleaded guilty to three separate property crimes in Yale — possessing a stolen weed-eater and chainsaw on Feb. 14, breaking into Mugsy’s Restaurant on Jan. 5, and burglarizing a woman’s building on Feb. 14. Stubblefield was given three concurrent sentences of 120 days in jail, with credit for time served, followed by four years and eight months of probation. Stubblefield was ordered to pay $7,480 restitution along with the cost of his incarceration, undergo a substance abuse evaluation, perform any recommended follow-up treatment, have random drug tests, show proof of employment and do 75 hours of community service.

According to court records, Stubblefield was living in Cushing in 2010 when he was charged with felony domestic violence in the presence of children at a different ex-girlfriend’s apartment where he arrived uninvited five days before Christmas. For that attack, Stubblefield was given a five-year prison term and told if he successfully completed the Bill Johnson Drug Offender Work Camp, the balance of his sentence would be suspended, court records show.

According to the state Department of Corrections, Stubblefield had also been convicted in Payne County of:

* possession of a precursor with intent to manufacture a drug in Stillwater in 2009 for which he was placed on probation in 2010 that was revoked on Feb. 25, 2011 to a concurrent 10-year prison term of which he served almost six years;

* possession of stolen property in Stillwater in 2008 for which he was placed on probation in 2009 that was revoked on Feb. 25, 2011 to a concurrent 10-year prison term of which he served almost six years;

* second-degree burglary and assault and battery on a police officer in 2008 for which he was placed on probation in 2009 that was revoked on Feb. 25, 2011 to a concurrent 10-year prison term of which he served almost six years;

* possession of a stolen vehicle in 2001 for which he was given a six-year prison term of which he served about five years.

According to DOC, Stubblefield had also been convicted in Haskell County of:

* second-degree burglary in 1999 for which he was placed on probation that was changed to a two-year prison term of which he served about one and one-half years;

* escape from confinement in 1999 for which he was given a concurrent two-year prison term of which he served about one and one-half years;

* larceny in 1999 for which he was given a concurrent two-year prison term of which he served about one and one-half years.