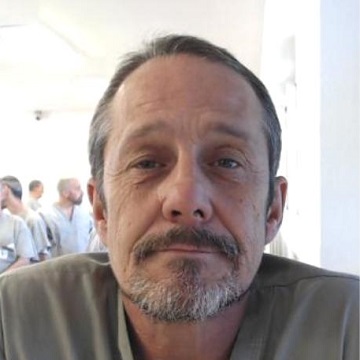 (Stillwater, Okla.) — An ex-convict from Enid, who allegedly exhibited strange behavior in the On-Cue lot at 124 N. Main Street in Perkins where he saw a police officer, has been jailed on $60,000 bail pending his arraignment this week on a four-count charge including assault with a dangerous weapon.

Tracey Lee Pierce, 52, had methamphetamine in his blood when he was tested at the Stillwater Medical Center emergency room, according to an affidavit by Perkins Police Investigator Charles Danker.

The investigator had just gotten fuel at the On Cue in Perkins at 5:53 a.m. on Jan. 2 when he saw a car travel through the fuel lane at an unsafe speed and quickly come to a stop, his affidavit alleged.

Pierce “had an agitated look on his face, appeared mad and was looking a 1,000 yard glare at me. He began to exit the vehicle, but the vehicle was still in gear and continued to roll forward,” until Pierce put it in park, the investigator alleged in his affidavit.

“With the subject’s behavior, I was uncertain as to what his intent was and I drew my assigned duty firearm from my side and rolled down my passenger side window,” the investigator wrote in his affidavit.

Pierce “exited the vehicle with a knife sheath and appeared to be trying to remove a knife as he approached the front of my patrol vehicle,” the investigator alleged in his affidavit.

“The knife had been removed from the sheath and was in the driver seat of the car,” while the sheath was on the ground between two pumps, the affidavit alleged.

“Tracey (Pierce) claimed to not be suicidal and appeared to be under the influence of an intoxicant. Tracey had slurred speech, he appeared amped up, and was talking about things that were not visible to me such as people with lasers and multiple other vehicles that were chasing him,” the affidavit alleged.

“During a pat down, I located about 12 green and white capsules in his pocket that he claimed were Trazodone. A check of the capsule through drugs.com showed the pills were Hydroxyzine Pamoate, a non-controlled drug. Life Net arrived and checked Tracey out. The medical crew advised that he had a high heart rate and believed he was under the influence of something. They recommended he be checked out at Stillwater Medical Center,” the investigator wrote in his affidavit.

While the investigator took Pierce to the hospital, Officer Laster located an open bottle of rum liquor behind the driver’s seat, the affidavit alleged.

“Tracey rambled on not making any sense about people chasing him, axes in his house, and people he identified as being part of the Irish Mob trying to kill him. Tracey said that he had to move all night so they couldn’t get their sight on him. Tracey also said he believed someone was in his back seat with a gun because he could hear clicking under the boxes in his back seat.

“Tracey was talking freely and said the people made him take Trazodone and valium. Tracey also said he can feel meth in his system, but he didn’t take it. Tracey was cleared by ER staff and the doctor said he was released and only had methamphetamine in his blood work the hospital conducted,” the affidavit alleged.

In addition to the knife count, Pierce was also charged with driving under the influence of an intoxicating substance, driving on a suspended license and transporting an open container of an alcoholic beverage, court records show.

According to the Oklahoma Department of Corrections, Pierce, whose first name has also been spelled as Tracy, was released from prison last February after serving about two years of two concurrent sentences, one for nine years and the other for eight years, for two counts of false personation in Garfield County, first in 2014 and then in 2016.