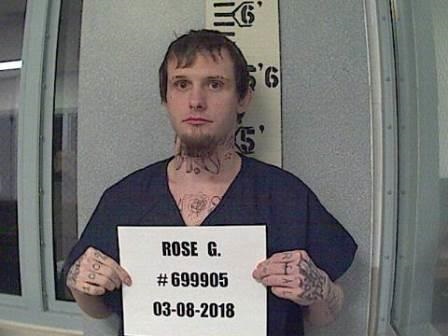 (Stillwater, Okla.) — An ex-convict has been jailed on $50,000 bail on felony charges of causing a crash that seriously injured one of his passengers while he was attempting to elude Stillwater police and running a roadblock at 56th and Perkins Road, as well as a misdemeanor count of driving under suspension.

Due to his criminal record, Gary James Rose Jr., 28, of Stillwater could be given as much as two life prison terms if convicted of his felony counts, court records show.

Rose was arrested at 7:25 pm on Oct. 9 after losing control of his vehicle “as it attempted to maneuver through the roadblock causing it to lose control and sideswipe a SUV and go horizontal across the southbound lane of travel before striking a stock trailer being pulled by a pickup, which had pulled off to the shoulder and was stopped,” Stillwater Police Detective Brett Moore wrote in an affidavit filed last week.

When two female passengers were removed from the vehicle, the one in the front seat “was crying hysterically and screaming in pain,” the affidavit said.

During a chase that began six minutes earlier with an attempted traffic stop, a male jumped out of the vehicle that ran stop signs and traffic signals, the affidavit alleged.

“As we approached 44th and Perkins, the vehicle attempted to turn westbound; however, due to speeds in the 90s (it) was unable to maneuver the turn causing the vehicle to go off road and back onto Perkins Road,” where a roadblock had been set up at 56th by Payne County Sheriff’s Deputy Jacob Secrest, the affidavit alleged.

“Deputy Secrest had positioned his vehicle in the northbound lanes and was out of his vehicle directing traffic. I observed Deputy Secrest throw his hand up directing the suspect vehicle to stop; however, the vehicle continued through the middle of the lanes,” before it lost control, the Stillwater detective wrote in his affidavit.

According to court records, Rose had gotten out of the Payne County Jail about six months earlier after serving seven months on a misdemeanor forgery charge from 2019.