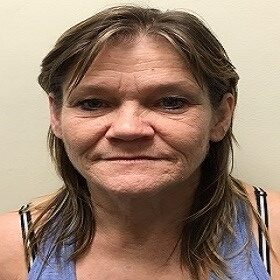 (Stillwater, Okla.) — A Cushing woman, who was charged with child endangerment, driving on a revoked license, transporting an opened container of alcohol, possessing methamphetamine and having drug paraphernalia, has been released from the Payne County Jail on $10,000 bail, court records show.

Former Stroud resident Michelle Lynn Leonard, 54, who has also used the surname of Deaton, could be incarcerated for as long as seven and one-half years if convicted of the five-count charge filed earlier this month.

Leonard was arrested in the 1200 block of E. Walnut Street in Cushing on Oct. 4 at 5:11 pm, about 20 minutes after Cushing Police Officer David Smith allegedly saw her fail to stop for a red light at E. Main Street and N. Linwood Avenue, an affidavit said.

Leonard, who has a history of substance-related convictions, initially identified herself by a relative’s name, the officer’s affidavit alleged.

“I asked the driver if she had anything to drink at all within the past day or night. The driver replied and advised she had been partying the night prior to this stop,” the officer alleged in his affidavit.

The driver, who was unsteady on her feet and smelled of alcohol, said she couldn’t remember when she last drank, the affidavit alleged.

After the woman was given field sobriety tests, she was arrested for driving under the influence and child endangerment, since a 13-year-old male relative was a back-seat passenger, the affidavit alleged.

“Once the driver was in my unit, I said ‘Gina,’ as she had stated it was her name earlier,” the officer alleged in his affidavit.

Leonard then told the officer that Gina was a relative’s name, not hers, and that she did not want to take the state’s breath test for the presence of alcohol, the affidavit alleged.

Family members later arrived to give an adult male passenger and the boy in the back seat a ride away from the scene, the affidavit said.

“Upon inventory of the vehicle, I located a teal water bottle located in the driver’s side door cup holder,” that had about 11 ounces of a clear liquid believed to be alcohol, the officer alleged in his affidavit.

“I later located a black and silver pipe in the back seat behind the driver containing a white powdery residue,” which field-tested as methamphetamine, the officer alleged in his affidavit.

According to the state Department of Corrections and court records, Leonard had been convicted in June of 2019 of false personation for using a relative’s name and drunk driving in Drumright; she was placed on two years’ probation except 45 days in the Creek County Jail for false personation, with a concurrent one year of probation for misdemeanor drunk driving.

In 2014, Leonard was placed on interstate probation from Texas for three years for possession of marijuana after a former felony conviction, DOC records show. In 2006, Leonard was placed on probation for three years for drunk driving in Prague in Lincoln County in 2004. In 2007, Leonard was given a two-year prison term for conspiracy in Lincoln County of which she served nine months’ incarceration, DOC records show.