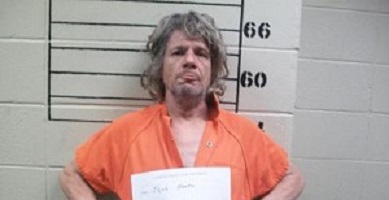 (Stillwater, Okla.) — A 60-year-old Cushing man accused of breaking into a Cushing woman’s house while she was sleeping has been jailed on $10,000 bail pending his arraignment today on a first-degree burglary charge.

If convicted, Elijah Montin, who has also been known as William Alfred Montin, could be given a prison term of seven to 20 years and fined up to $10,000, according to the charge filed last week.

Montin was arrested at his home in the 800 block of S. Noble in Cushing at 12:10 pm on April 2 — after being shown a video of himself breaking into the woman’s house from which a pack of cigarettes was taken, Cushing Police Officer Christopher Haywood alleged in an affidavit.

Two hours earlier, a Cushing woman had reported to police “she had been checking her camera notifications and watched a video that had occurred the day previous, April 1 at about 8:23 am, the affidavit said.

The woman showed the officer a video “showing a white male with shoulder-length hair, wearing a dark-colored jacket and black and white ball cap, enter into her residence through the carport door,” the affidavit said.

“The male appeared to be Elijah Montin, as I am familiar with him from previous contacts,” the officer wrote in his affidavit.

The woman said “the door he used to enter into her residence was directly next to the camera that was recording him,” the affidavit alleged.

She said, “the door he entered leads into the laundry room,” the affidavit said.

“In the video, Montin spends about one minute inside (her) residence, then exits. After Montin exits, he can be seen lighting a cigarette from a pack of cigarettes he removes from his pocket. Once Montin lights the cigarette, he is seen re-entering the residence a second time. Once Montin exits the second time, it does not appear as though he is holding anything in his possession,” the affidavit said.

The woman said “she was home during the time Montin entered and was asleep in her bedroom. (She) continued to say the only thing she could find missing was a pack of cigarettes. (She) did believe that the cigarettes Montin used are the same that were taken from her laundry room,” the affidavit alleged.

At about 12:05 pm the officer went to Montin’s home and asked if he would help identify someone in a video, the affidavit said.

“Montin agreed and stepped out onto his porch. When Montin stepped out onto the porch, I noticed he was still wearing the same clothing as from the video,” the officer alleged in his affidavit.

“Montin asked where the video was from. I told him the 300 block of E. 8th. Montin watched the video and said, ‘The house over there,’ and pointed to the woman’s house, the officer alleged in his affidavit.

“I told Montin yes and asked him why he went into the house. Montin replied, ‘it was unlocked.’ Montin continued to say that no one lived there.

“I advised Montin someone did live there and was home when he entered. Montin said, ‘but I didn’t take anything.’ I advised Montin that he took a pack of cigarettes and I placed him under arrest for first-degree burglary,” the officer wrote in his affidavit.