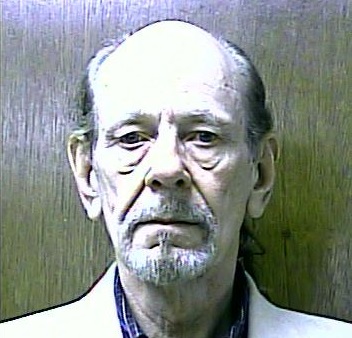 (Stillwater, Okla.) — A 71-year-old convicted child sex offender, with a history of drug and gun arrests, has been ordered to appear in court on March 1 on charges of being a felon in possession of a pistol, as well as having methamphetamine and drug paraphernalia in Cushing.

Cushing resident Justin Wayne Sandlin, who remains jailed on $15,000 bail, could be incarcerated for as long as 12 years if convicted of a three-count charge filed this month.

Sandlin was arrested at 2:04 am on Feb. 8 in Cushing after a traffic stop in the 700 block of E. Main Street by Cushing Police Officer Carson Watts, court records show.

While the Cushing officer was on duty at Main Street and Little Avenue at 2 am, he “began to hear a loud noise, but was unsure of where the noise was coming from,” his affidavit said. “A few moments later, I observed a white Dodge pickup traveling eastbound through the intersection dragging multiple items behind the vehicle,” the officer alleged in his affidavit.

“As I got behind the pickup, I could see the items being dragged were making sparks along the roadway. I conducted a traffic stop on the pickup for failure to secure load,” the officer alleged in his affidavit.

“As I approached the rear of the pickup, I could see it was dragging a metal grill, a wooden ladder and a vacuum cleaner,” the officer wrote in his affidavit.

“Justin told me that his ropes must have come untied and did not realize he was dragging items. As Justin got out of his pickup, I believed I could see in plain view the barrel of a semi-automatic firearm resting on top of the cupholders in front of the front seat driver’s center console,” the officer alleged in his affidavit.

“As I retrieved the firearm, I saw that it was a 45 ACP Hi-Point pistol. I took out the magazine and opened the slide of the pistol and found it to be chamber-loaded with either cartridges in the magazine,” the officer alleged in his affidavit.

After learning that Sandlin had multiple prior felon convictions, “I asked Justin why he was carrying a firearm and he told me that he borrowed it from a friend for protection because of all the riots he had seen on the news,” the officer alleged in his affidavit.

“I asked Justin if he knew he wasn’t supposed to be in possession of a firearm as a convicted felon, and he told me that he wasn’t sure, since the laws have changed with open carry,” the officer alleged in his affidavit.

After Sandlin was arrested for the alleged gun violation, the officer found in his truck a black cloth bag containing several glass smoking pipes with white and black burnt residue commonly used to smoke methamphetamine, the affidavit alleged.

“Inside the same bag, I located a clear sandwich baggy containing a clear crystal substance,” also several small blue plastic bags with a white crystal substance, the officer alleged in his affidavit. A field test of the contents of the clear baggy showed that it was positive for methamphetamine, the affidavit alleged.

According to court records and the state Department of Corrections, Sandlin had previously been convicted in Oklahoma County of:

* lewd or indecent proposals/acts to a child in 1989 for which he was placed on five years of probation in 1990;

* possessing methamphetamine in 2014 for which he was placed on five years’ probation in 2015;

* possessing a sawed-off shotgun and being a felon in possession of a firearm for which he was given two concurrent probationary terms of 10 years in 2015.