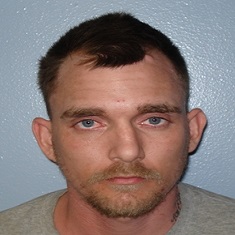 (Stillwater, Okla.) — A convicted child molester has been given a five-year prison term for failing to notify authorities that he had moved from a rural Perkins address in the 4500 block of E. 104th, where he had been registered as a sex offender in September of 2018.

Dave Luther Kendrick, 31, who already had three prior convictions for violating the Oklahoma Sex Offender Registration Act, admitted his latest charge, for which he was sentenced as part of a plea bargain approved by District Judge Phillip Corley last week.

Kendrick was given a concurrent one-year jail term and ordered to pay $1,546 restitution for punching his ex-girlfriend in the eye at his rural Perkins residence on March 11, to which he pleaded guilty. She had bruising on her arm, redness on her upper chest, and bruising on her left eyelid, an affidavit by Payne County Sheriff’s Deputy Lewis Kellison said.

After Kendrick’s court-appointed attorney Royce Hobbs said in court “he has a substance abuse issue,” the judge told Kendrick “I encourage you to seek treatment,” in prison.

Kendrick had pleaded guilty in 2013 to lewd acts to a 14-year-old girl in Noble County in 2012, for which he was given a nine-month jail term followed by nine years and three months of probation, court records show.

Kendrick had previously been convicted of sex offender registration act violations in :

* Lincoln County in 2016, for which he was given a two-year prison term in 2017 of which he served about seven months;

* Payne County in 2017, for which he was originally placed in 2018 on five years’ probation, the balance of which was revoked Friday;