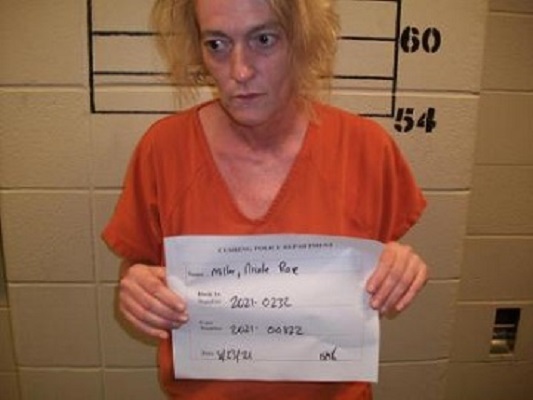 (Stillwater, Okla.) — A bench warrant has been issued for the arrest of a 50-year-old Cushing woman, who had been ordered into Payne County Drug Court after pleading guilty to spitting on a Cushing police officer after being arrested for public intoxication.
Nicole Rae Miller, also known as Nikki Rae Hill and Nicole Rae Simmons, had failed to appear in court before District Judge Phillip Corley, who ordered a warrant for her arrest on Friday.
Miller had been jailed for nine months on $15,000 bail, but she was released on a personal recognizance bond on May 27 when she was ordered into Drug Court.
Cushing Police Officer Sara Reynolds had been standing at her patrol car at 1:30 pm on Aug. 23, 2021, when she saw Miller walking in the grass and then lying down, an affidavit said.
“As I began to walk over and check on her, Miller stood up and began to walk once more. I asked Miller if she was okay and she started talking, but I was unable to understand her,” the officer wrote in her affidavit.
At 2:07 pm the officer was sent to a convenience store on Main Street where two employees told her “Nikki Miller had stolen beer,” the affidavit alleged. The employees said, “Miller walked over to the beer section of the store and grabbed one can of beer,” the affidavit alleged.
At 6:10 pm the officer was sent to the 600 block of N. Depot in Cushing on a report that Miller went on a neighbor’s property and kicked a dog on the front porch, the affidavit alleged.
The neighbor, who had company, said Miller walked over to his property and yelled at him, the affidavit alleged.
The neighbor said he told Miller she needed to leave and closed the door, but then when he looked out the window, he saw Miller “rear back and kick his dog on the front porch,” the affidavit alleged.
After the officer spoke to the neighbor, she walked across the yard to Miller’s camper, the affidavit alleged.
“I knocked on the door and Miller immediately started to scream at me. The blinds were open, and the windows were busted out on the camper, so I was able to speak and see Miller,” lying on the bed, the officer alleged in her affidavit.
“Miller told me to leave because I was on private property and refused to step outside and speak with me. Based on my past experiences with Miller, I was able to determine she was currently intoxicated. I told Miller she needed to stay inside her camper since she had been drinking earlier in the day,” the officer wrote in her affidavit.
As the Cushing officer was talking to the neighbor and Cushing Police Sgt. Matt Piatt, “Miller opened the door to her camper and began to walk across the yard. I observed her walking unsteady and with no shoes on as she began to walk towards the highway.
“I immediately ran to my car and observed Miller cross the highway,” and walk to a relative’s yard, the officer alleged in her affidavit. The officer told Miller’s relative that she needed to come back outside and speak to her, the affidavit alleged.
“As I was waiting outside, I observed the back door open, and Miller walked outside and began to walk towards the other side of the home. Miller then began to run. I was running towards Miller when she immediately stopped. As I looked at Miller, I observed her to be sweating profusely,” the officer alleged in her affidavit.
“Sgt. Piatt then came around the corner and grabbed Miller with his arm in an effort to control her. Miller then reached back and tried to grab Sgt. Piatt’s firearm. Sgt. Piatt advised Miller to not reach for his firearm and placed Miller on the ground. Miller resisted and refused to place her right arm behind her back. Once I was able to place her arm behind her back, Miller was placed into handcuffs and arrested for public intoxication,” the officer alleged in her affidavit.
“Sgt. Piatt and I then assisted Miller off the ground and began to walk her to my patrol vehicle…Miller looked over at me, so I turned my head to look at her. Once we made eye contact, Miller spit in my face. Sgt. Piatt then walked Miller to my car and placed her into the back seat.
“Once I was in my vehicle, Miller proceeded to keep spitting at me and made a comment…Miller then proceeded to make more comments and stated she would be back out by tomorrow,” the officer wrote in her affidavit.
At the Cushing police station, “Once placed into her jail cell, Miller took off all her clothing and smeared what appeared to be feces on the window of the cell door,” the affidavit alleged.
According to Payne County court records and the state Department of Corrections, Miller had been convicted in 2017 of aggravated eluding in Stillwater in 2016 and placed on a five-year suspended sentence. But four years later, Miller was found in violation of her probation and given a 45-day jail term with an order to undergo random drug tests.
At the age of 20, Miller had been given a five-year prison term for embezzlement in 1992 when she also received a concurrent five-year prison term for drug possession in 1991, DOC records show.