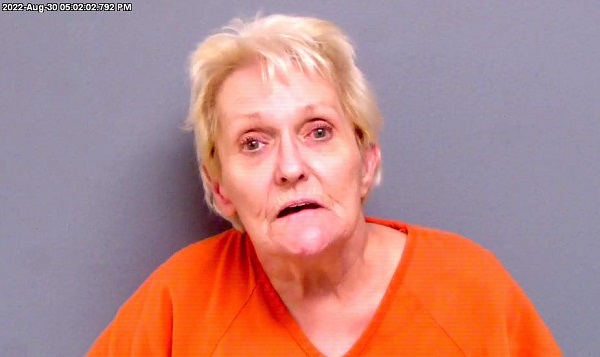 STILLWATER — A 64-year-old repeat drug offender from Stillwater has been jailed on $100,000 bail pending a Nov. 7 preliminary hearing on a methamphetamine trafficking charge in Payne County.
Melinda Lee Snyder, who has also been known by the surname of Wood, could be given as much as a life prison term and a $100,000 fine if convicted, court records show.
Snyder was a passenger in a vehicle during a traffic stop on S. Perkins Road at 5 pm on Aug. 29 when Stillwater police learned she had an outstanding arrest warrant, an affidavit alleged.
While speaking to a detective, “Snyder indicated she had methamphetamine in her shorts. Snyder willingly retrieved a clear sandwich sized zip top baggy containing a crystal-like substance believed to be methamphetamine,” Stillwater Police Officer Newly McSpadden alleged in an affidavit.
The weight of the methamphetamine was 21.9 grams, the affidavit alleged.
According to state Department of Corrections records, Snyder was first sent to prison in 1992 for possession of a drug with intent to distribute in 1989 in Payne County and served one year and eight months of a three-year sentence.
Snyder was again sent to prison in 2002 for drug trafficking in Payne County in 2000 and served five years and nine months of a seven-year sentence, DOC records show.
Snyder was again sent to prison from Payne County in 2008 when she was given four concurrent 10-year sentences for possessing methamphetamine, possessing marijuana with intent to distribute, and having no tax stamp on a drug, all in 2004, as well as possessing methamphetamine with intent to distribute in 2008, but she was released in 2012 after serving about three years and two months, DOC records show.