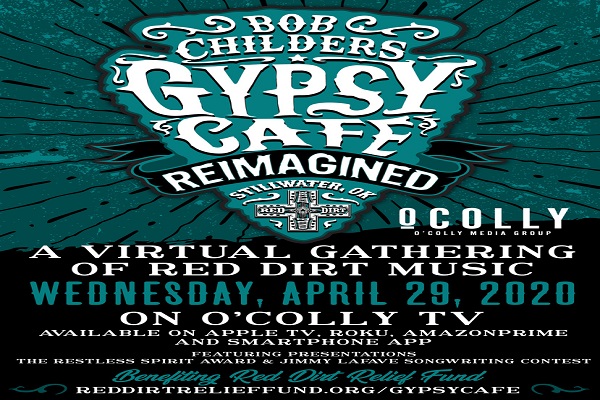 March 6, 2020—Bob Childers’ Gypsy Café, Oklahoma’s largest homegrown songwriter festival that has taken place in Stillwater, Okla. for the past eight years, will be “Reimagined” as a show that will premiere on digital streaming platforms through O’Colly TV on April 29 at 6:00pm. The festival benefits Oklahoma artists in need through the Red Dirt Relief Fund.

“While we are disappointed that this festival, and so many festivals and live gigs, can’t take place as planned, we are grateful to the artists for being flexible, to our presenting partner the Oklahoma Film + Music Office and to O’Colly Media Group for making this production possible,” said Red Dirt Relief Fund Executive Director Katie Dale. “We’re committed to giving the fans a unique musical experience, especially in these uncertain times. We trust in the healing power of music.”

While the show will air for free on Apple TV, ROKU, AmazonPrime, smartphone app and social media, Red Dirt Relief Fund will be accepting donations for their financial assistance fund at reddirtrelieffund.org/donate, PayPal.me/RDRF or by texting “relief” to 202-858-1233. Since March 16, the nonprofit has granted $100,000 in one-time $250 emergency grants to Oklahoma music people affected by COVID-19 cancellations and closures. Since 2012, the organization has granted more than $300,000 in emergency aid to music people across industry geographies and genres.

Fans who have already purchased festival tickets will be contacted with the option to convert their ticket to a donation to become a sponsor of the show or request a refund.

To stream the show through Roku, Amazon or Apple TV, search “O’Colly” to add the channel. For tablet or mobile device, go to the App Store and search “O’Colly TV” for the free download.

This annual award will be presented virtually to Charlene Ripley on behalf of her husband, Steve Ripley, whose career spanned more than four decades as a recording artist, record producer, songwriter, studio engineer, guitarist, and inventor. He is said to have coined the moniker “Red Dirt” when his band, Moses, released their first self-published live album under the label Red Dirt Records in 1972. He went on to be the leader of the country band, The Tractors, invent the Ripley guitar made famous most notably by Eddie Van Halen, inducted into the Red Dirt Hall of Fame (2003) and produced the Oklahoma health care anthem, “Stand,” for Red Dirt Relief Fund. He worked with artists including Bob Dylan, JJ Cale, Leon Russell, Clarence “Gatemouth” Brown, Roy Clark and Red Dirt Rangers among many. Ripley succumbed to cancer on January 3, 2019, two days after his 69th birthday, at his home in Pawnee, Oklahoma

The Restless Spirit Award is given by the Red Dirt Relief Fund in recognition of a musician who has impacted the Oklahoma music community in a spirit akin to Bob Childers, a prolific songwriter and the so-called godfather of red dirt music. Previous honorees include Jimmy LaFave (2017), Brandon Jenkins (2018) and Randy Crouch (2019).

The winners of the Jimmy LaFave Songwriting Contests will also be announced during the broadcast. Out of 76 entries, judges including Tim Easton, Jude Johnstone, Eric Peltoniemi Brad Piccolo and Roger Ray selected three finalists: “Dandelion Wine” by Sandra Stewart DeVault, “Just a Part of Love” by Kenny Cornell and “Romeo’s Girl” by Joe Baxter.

Starting April 10th, videos of the finalists performing their songs will be posted at https://www.reddirtrelieffund.org/jlfsongcontest/ as public voting for the “People’s Choice” award begins ($100 prize). The judges will also select the grand prize winner from the finalists’ videos for a $500 prize and inclusion in the Bob Childers’ Gypsy Cafe: Reimagined show. Previous winners of the contest include Ken Pomeroy (2018) and Dallas Parker aka Faux Draco (2019).