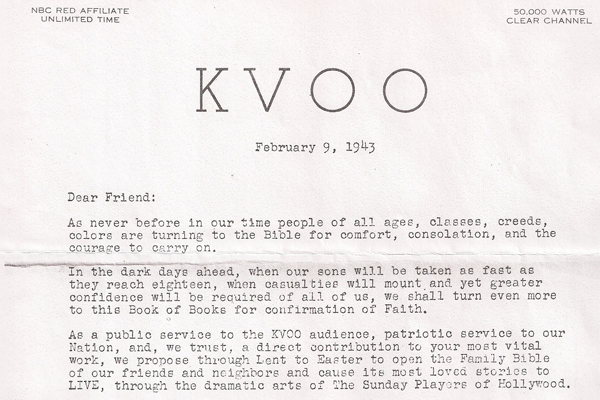 (Cushing, Okla.) — Recently KUSH received some interesting mail from a local resident. Enclosed was a letter explaining the contents and a copy of a letter, dated February 9, 1943, he had found in a file box at Calvary Baptist Church in “Schlegel, America.”

The sender wrote he had found the contents of the letter both inspiring and hopeful for our country and the tumultuous times we live in.

The original letter had been issued by Tulsa radio station KVOO AM to announce an Easter series being broadcast on Sunday afternoons at 3:30 – February 7th thru May 2nd, 1943.

It was definitely tumultuous times back then. Franklin D. Roosevelt was President; Adolf Hitler had just declared war a few weeks before; and Japanese troops had just evacuated Guadalcanal, ending the epic WWII battle on the Solomon Islands in the Pacific.

KVOO had just become a powerhouse station, blasting the airwaves at 50,000 watts during the day and 25,000 at night.

KUSH, on the other hand, was still a decade away from existence.

Reading this letter, reminds us that as much as things change, they still remain the same. There is still a need to come together as a family, a community, a state, a country and the world. It also made me proud to be a part of a locally-owned radio station that still chooses its broadcasts – including local church services, words of inspiration and inspirational music.

Check out our on-air line up here: https://www.1600kush.com/onair

If you would like to submit news about what’s happening at your church, please contact us at kushradio@gmail.com.

For those interested in what the 1943 letter said, here is it is in its entirety:

As never before in our time people of all ages, classes, creeds, colors are turning to the Bible for comfort, consolation, and the courage to carry on.

In the dark days ahead, when our sons will be taken as fast as they reach eighteen, when casualties will mount and yet greater confidence will be required of all of us, we shall turn even more to this Book of Books for confirmation of Faith.

As a public service to the KVOO audience, patriotic service to our Nation, and, we trust, a direct contribution to your most vital work, we propose through Lent to Easter to open the Family Bible of our friends and neighbors and cause its most loved stories to LIVE, through the dramatic arts of The Sunday Players of Hollywood.

Sincerely believing that these broadcasts, by placing the Bible in sharper focus will cause more men and women and boys and girls to become interested in organized study of the Bible and in religious activities generally, we trust you may find this program worthy of your approval and your cooperation.
The opening broadcast in the Easter series, entitled A CHILD IN THE TEMPLE, was broadcast Sunday, February 7, at 3:30 p.m. and the subsequent programs will be brought each Sunday at the same time through May 2.

May we hope that you find opportunity to listen to these broadcasts and, if you feel that this morale-building effort merits your support, you will be kind enough to mention these broadcasts from your pulpit and call attention to those LIVING PAGES FROM THE BOOK OF LIFE in other ways.

With every good wish for continued success in your work, we are
Respectfully and cordially yours,