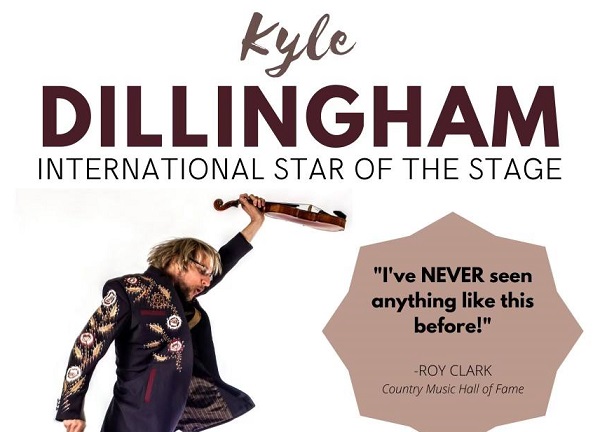 (Bristow, Okla) — Music artist and international fiddle legend, Kyle Dillingham, is bringing his acclaimed stage concert to the Freeland Center, for a night of toe tapping music and uplifting fun for the whole family!

Get your tickets NOW!  You won’t want to miss this show!

Click on the Ticket link to purchase your tickets in advance:

Kyle Dillingham, of Oklahoma City, started playing the violin when he was nine and received his bachelor’s degree in instrumental music performance from Oklahoma City University. He is an Oklahoma Creativity Ambassador and was a 2009 recipient of the OK Governor’s Art’s Award. Kyle also works as the “Ambassador in Residence” at the University of Central Oklahoma, using his “musical diplomacy” to help develop and strengthen new overseas relationships for the university.

While still in high school, Kyle was featured twice on Nashville’s Grand Ole Opry. He has performed for the King of Malaysia, the Princess of Thailand, Singapore’s National Day Celebration, and his performance at the Beijing Central Conservatory was broadcast on Chinese national television. A frequent visitor to Washington D.C, he has performed for the Japanese, Thai and Saudi Arabian Ambassadors, to name a few. He has also performed several times with Roy Clarke and Hank Thompson. He has been soloist with the Amici New York Orchestra, the Oklahoma City Philharmonic, the Enid Symphony Orchestra, the UCO Orchestra and Chamber Orchestra and the Oklahoma Community Orchestra. Kyle has taken his music to over 30 countries earning him the title of “Oklahoma’s Musical Ambassador.”

Kyle is proud to be playing Glasser Bows exclusively.